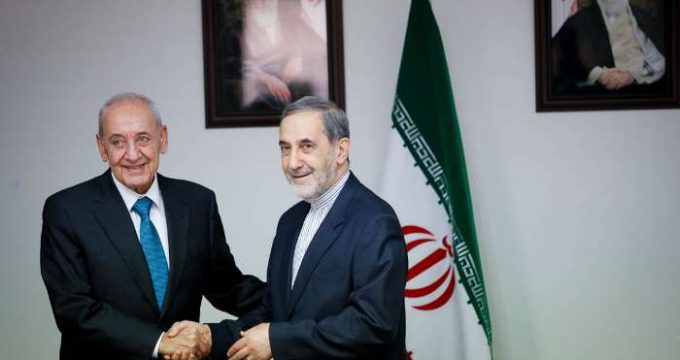 IRNA – Supreme Leader’s Senior Advisor Ali Akbar Velayati said on Wednesday that Lebanon is considered as a source of pride for Islamic and Arab countries thanks to the measures of Amal Movement and Lebanese Hezbollah.

Velayati made the remarks in a meeting with Lebanese Parliament Speaker Nabih Berri in Tehran.

He said the resistance has had very influential role in the honor.

Velayati added, ‘You played very important role in founding new Lebanon and had very serious role along with Imam Moussa Sadr and Amal Movement, you had positive role in campaign against Zionist regime before the Islamic Revolution of Iran.’

‘Your role in fighting Israel and defending Palestine is fully clear. After revolution Lebanese Hezbollah Movement was established and the important action taken gradually by Amal Movement and Hezbollah was to have unity and cooperation with dignitaries of Sunnis and other religions in Lebanon.’

He said, ‘We look as two brothers and friends not as ones having posts and jobs.’

Berri said, ‘In meeting with the Supreme Leader of Islamic Revolution yesterday, we heard as he said how we should launch resistance against American imperialism; he told us one cannot fight the camp of arrogance just through political and military hardwares rather, it should be followed through scientific means as well. To record in history, I should say it was the Islamic Republic of Iran to form the basis of resistance and revolution in Lebanon and our movement was led by Imam Moussa Sadr, who was Iranian and wished campaign against Israel by the least and meager facilities of the time.’

He added, ‘Also, the one responsible for planning the issues was late Martyr (Mostafa) Chamran. The first resistance operations in Lebanon took place in 1974. That year, we supposed that Israel has some plans in Lebanon and we should not hence allow them to occupy our territory and we should resist as we did.

When Hezbollah was formed from inside Amal Movement, a sort of contradictory confrontation erupted between us and foreign elements also meddled somehow and those times Mr. Velayati was Iran’s foreign minister and played a very major role in settling the issues and I will never forget those times.

Since that time and God willing forever, I and my brother Syed Hassan Nasrallah are two spirits in one body and the foundation of the Islamic republic of Iran was and is still our structural infrastructure. Today, more than ever, we are in need of unity in Lebanon and Iran and even in other Islamic countries because there are many big plots against us. This is because we are facing new policy maker in the US who does not hold fixed stances and I cannot present a description of his shaky personality on the whole.’