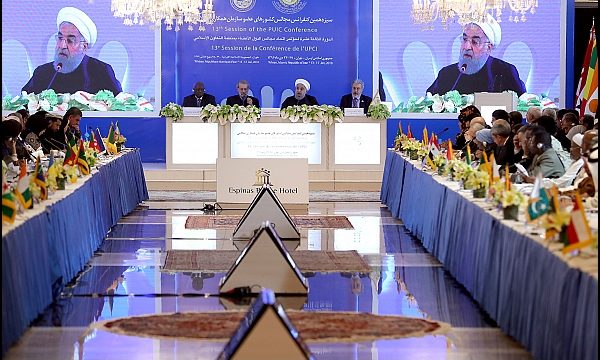 January 18, The Iran Project – The 13th edition of the Parliamentary Union of Islamic Cooperation Conference held in Tehran on January 13-17 attended by several experts from 41 Islamic Countries.

Addressing a meeting with the attendance of parliament speakers from across the world, Supreme Leader said the US recent move to relocate its embassy from Tel Aviv to Beit-ul-Moqaddas will bring about no result, adding that this recent move by the US officials – who have recently been acting more blatantly towards Quds – won’t get anywhere and their moves won’t bear results.

Ayatollah Khamenei also said the Palestinian cause is among the main issues of the Muslim world and added, “In the Palestinian issue, the three incidents of ‘land occupation’, ‘mass expulsion of millions of people’ and ‘massacre and horrible crime against humanity’ occurred.”

The Leader stressed the importance of countering the “conspiracy of silence” aimed at cosigning to oblivion the main issues of the Muslim world, particularly the Palestinian cause.

Speaking at  the PUIC Conference, President Hassan Rouhani stated that Islam is the religion of democracy and peace, urging the representatives of Muslim people at legislative assemblies of Islamic countries to do their utmost to help their leaders and political authorities to boost the spirit of fraternity and development-oriented unity.

Meanwhile, addressing the closing session of PUIC, Speaker of the Iranian parliament Ali Larijani said, “In the 13th PUIC we witnessed that there was no differences among the members and all are in concordance.”

He said atmosphere of friendship governed the session, adding, “And I did not notice any point of difference among the Islamic parliaments. Even when it came to electing the secretary general, which was conferred to Senegal, all countries accepted it with the unifying spirit. This showed that under the sensitive conditions today, our bonds have got further consolidated.”

At the end of the conference, the final statement issued which said the Islamic countries must suspend their relations with the Zionist regime and US until Trump changes his stance.

The statement says that peace, democracy and stability in the world of Islam serve as prerequisites to cooperation among Islamic nations for building a developed, secure and stable world. “Justice, peace and security on the one hand and sustainable development on the other hands are the two aspects that need to be the top priority on national, regional and international agenda,” the statement reads.

The statement highlights thirteen points that are of utmost importance to global affairs.