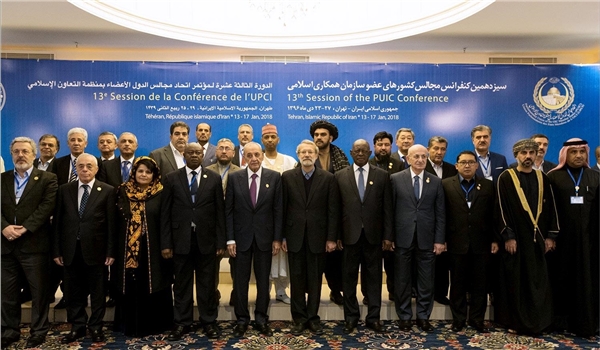 FNA- Delegations participating in the 13th Conference of the Parliamentary Union of the Organization of Islamic Cooperation (OIC) member states (PUIC) in Tehran deplored Washington’s decision to transfer its embassy to Jerusalem al-Quds and recognition of the city as Israel’s capital.

“The US measure to transfer its embassy to Beit al-Moqaddas is a type of aggression because it has violated the international laws,” Head of Afghanistan’s parliamentary delegation Karameddin Rezazadeh said on Wednesday.

Also, the head of Malaysian parliamentary delegation attending the PUIC meeting voiced regret over US President Donald Trump’s decision to transfer embassy from Tel Aviv to Quds, warning, “Such hasty decisions will certainly have unpleasant consequences.”

Meantime, Abdollah Ansari, the head of Moroccan parliamentary delegation, underlined the Islamic states’ opposition to Trump’s decision, and said, “We should be united on the issue of Quds and we can foil these plots through talks with each other.”

Also, Head of Jordan’s parliamentary delegation Khamis Atta stressed that the Zionists can never disturb Quds’ identity, and said, “Supporting Quds is our main goal and we pursue it seriously.”

Also, Gohar Bakhshayesh, the head of Azeri parliamentary delegation, said that the Islamic world is concerned about the US president’s recognition of Quds as the Israeli capital, and said, “This measure has violated all international laws.”

In relevant remarks on Tuesday, Supreme Leader of the Islamic Revolution Ayatollah Seyed Ali Khamenei underlined that the US is overstepping its boundaries in recognizing al-Quds (Jerusalem) as Israel’s “capital” and planning to move its embassy there, saying such measures are in vain.

Ayatollah Khamenei made the remarks during a meeting with participants in the 13th Session of the PUIC Conference in Tehran.

Ayatollah Khamenei described the recent decisions by US officials concerning Jerusalem al-Quds as “arrant erring”, and said, “They will not be able to carry out this measure and their efforts will not bear fruit.”

On December 6, US President Donald Trump defied global warnings and said Washington formally recognized al-Quds (Jerusalem) as the “capital” of Israel and would begin the process of moving its embassy to the occupied city, breaking with decades of American policy.

Trump’s declaration has sent shock waves throughout the Muslim world and even prompted warnings from Washington’s allies in the West that it would bring more chaos to the region.

Ayatollah Khamenei also said the Palestinian cause is among the main issues of the Muslim world, adding, “In the Palestinian issue, the three incidents of ‘land occupation’, ‘mass expulsion of millions of people’ and ‘massacre and horrible crime against humanity’ occurred.”

The Supreme Leader said that these acts of oppression have never ever happened against any other nation.

Ayatollah Khamenei stressed the importance of countering the “conspiracy of silence” aimed at cosigning to oblivion the main issues of the Muslim world, particularly the Palestinian cause.

The Supreme Leader urged Muslim countries to counter the “dangerous and horrific Western propaganda empire” which, the Leader said, is run by Zionists.

Ayatollah Khamenei warned that the important issue of Palestine is being totally ignored by the international community.

The Supreme Leader emphasized that the Muslim world must now play a role in “important and fundamental issues” and prevent the reoccurrence of the “bitter experience of the past decades and dominance of powers and their long-term effects”.

Ayatollah Khamenei urged the Muslim countries to be explicit vis-à-vis the fundamental issues of the Muslim world in order to be able to influence public opinion and set trends.

Ayatollah Khamenei added that Muslim countries should not allow discord, war and bloodshed, whose main cause are the US and Zionists, to establish a safe haven for the Zionist regime.

The Supreme Leader further pointed to the US claim on advocating human rights and said the current US president is stating the country’s stances “very nakedly and explicitly.”

Ayatollah Khamenei called on the Muslim nations to help resolve the crises in Yemen and Bahrain as they are among the important issues of the Muslim world.

The Supreme Leader also said the Iranian nation has managed to thwart the enemies’ economic war against the Islamic Republic, including sanctions, through its resistance.