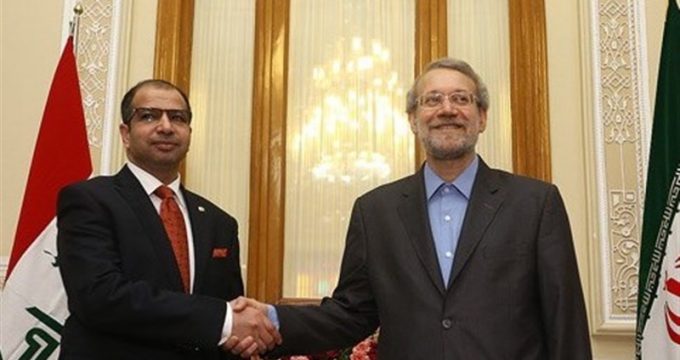 MNA – Iran’s Parliament speaker met with his Iraqi counterpart on Tuesday (January 16) where he expressed hope that the upcoming parliamentary elections in Iraq can be held in a timely manner with impressive public participation.

Iranian Parliament Speaker Ali Larijani met with the Speaker of the Iraqi Parliament Salim al-Jabouri and his delegation on the sidelines of PUIC Conference which is being held in Tehran, saying “I hope that Iraq can go through the process of reconstruction as fast as possible now that it has been rid of terrorist groups and can return to a normal situation.”

“The key to holding a successful election is public presence and participation and we hope that the upcoming parliamentary election in Iraq can be held in a timely manner with impressive contribution from the nation,” he added.

For his part, the Speaker of the Iraqi Parliament Salim al-Jabouri expressed satisfaction over participation in the PUIC Conference and added that Iraq was able to defeat terrorist groups such as ISIL through receiving support from Iran.

Having expressed gratitude to Iran for its help, al-Jabouri said “we are concerned about the regional problems and we hope that countries can resolve them through adopting tactful solutions.”

In conclusion, he discussed the upcoming elections, saying “we hope that the election can be held according to schedule with noticeable public participation.”