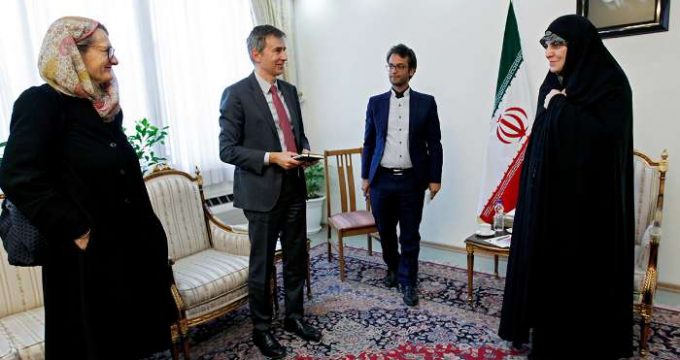 IRNA – The government of President Hassan Rouhani believes that the people should have a say (in the country’s affairs), said the Iranian President’s special assistant for citizenship rights.

‘President Rounani’s Administration believes that necessary plans should be outlined to help realize the public demands,’ Shahindokht Molaverdi said during a meeting with the Swiss Ambassador to Iran Markus Leitner Tuesday evening.

Referring to the recent protests in the Iranian cities, originally shaped to express discontent over bad economic situation, Molaverdi said that the government considers such unrests as an opportunity not a threat.

‘We hope it will provide us with an opportunity to foster more dialogue between the government and all the groups in the society,’ she said.

‘According to Article 27 of the Iranian Constitution and clauses stipulated in the Citizenship Rights Charter, proposed by the government of President Rouhani, the people’s right to hold demonstrations is recognized,’ she said, answering a question by the Swiss envoy about measures taken so far to let the people’s voices be heard.

The Iranian President’s special assistant for citizenship rights also said that a national report on implementation of the Citizenship Rights Charter; advances, solutions and hurdles, is expected to be released by the government soon.

It is quite a fledgling process that may need much time to be fully developed and put in forth, Molaverdi said.

‘The government is working on developing the legal and structural basis to institutionalize realization of citizenship rights,’ she stressed.

In the meantime, the Swiss ambassador said that authoring the Citizenship Rights Charter is an important step taken by the government of President Rouhani.

But what remains to be more important is its implementation, Leitner stressed.

There are different grounds for Iran and Switzerland to engage in dialogue on citizenship rights, he said.