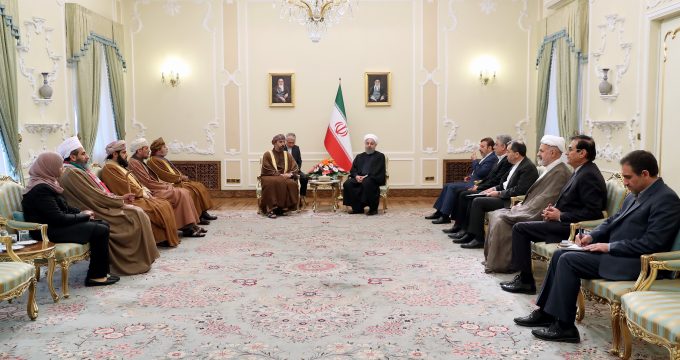 Iran determined to deepen ties with Islamic countries, including Oman

president.ir- President Rouhani met with the speaker of the parliament of Oman and stressed that the enemies do not want Islamic countries to be united and integrated, adding: “The Islamic Republic of Iran is firmly determined to deepen brotherly, inclusive ties with Islamic countries, including Oman”.

Speaking on Wednesday in Tehran, President Hassan Rouhani described Tehran-Oman ties close and developing, adding: “Relations between the two countries are developing and political and cultural relations are at the highest level”.

He said: “The Islamic Republic of Iran welcomes the activities of Omani investors in the Chabahar and Jask free zones and in various economic sectors, especially in the field of transit”.

Dr Rouhani further referred to the importance of the thirteenth session of the Parliamentary Union of the OIC Member States (PUIC) in Tehran, saying: “The enemies of Islam seek their own interests in promoting discord between Muslims and do not want Muslims and Islamic countries to be united and integrated, therefore, conferences of the Islamic countries on shared issues and joint decisions can be an effective step in strengthening peace and stability in the region”.

On the issues of the Yemeni people in terms of security and health, he said: “Today, the people of this country face a lot of problems due to bombing and infectious diseases, and in such circumstances, it is our humanistic duty to help these people in terms of food and medicine”.

“Oman can be the centre for attracting humanitarian aid to the Yemeni people, and this is historically, humanly and religiously important,” Rouhani continued.

He also emphasised efforts to bring peace and stability and end the war in Yemen, saying: “Cooperation between the countries of the region, especially Iran and Oman, is very important, and both countries can play a very valuable role”.

“Unfortunately, some western countries are very happy about the fighting in the region because of their arms sale and do not pay attention to human aspects, but it is important for the region that Yemen stands safe and stable and we see the end of the war and bloodshed in this region and I hope that Muscat plays a more significant role in this field,” he said.

At the meeting, the Chairman of the Majlis Al Shura of Oman, Khalid bin Hilal Al Mawali described the thirteenth session of the Parliamentary Union of the OIC Member States successful, saying: “The Islamic Republic of Iran has always been particularly concerned with protecting the oppressed around the world, especially the Palestinian issue. Fortunately, Islamic nations are well aware of the danger posed to Muslims and the Quds”.

He also praised the Islamic Republic of Iran’s humanitarian assistance to the Muslims of the world, saying: “In helping the Yemeni people, Oman also has tried to play its humanitarian role, and we have no doubt that the political dialogue and political solution is the greatest and the most effective solution for peace and stability in the region”.

He described Tehran-Muscat relations very special and friendly and said: “We are determined to deepen our economic relations with Tehran more than before”.