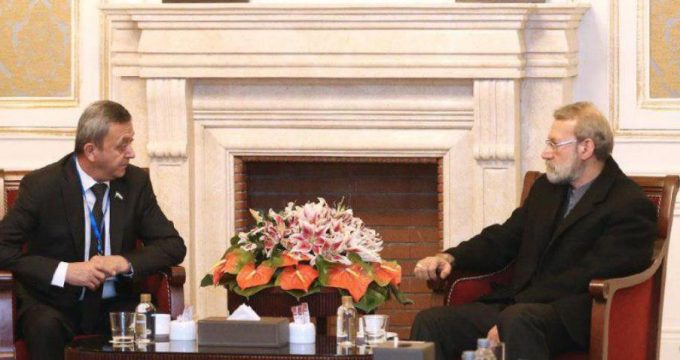 Larijani made the remarks in a meeting with visiting Vice-Speaker of lower chamber of Tajikistan’s parliament Abdujabbor Azizi in Tehran on Monday.

Both neighbors should pay heed to issues which may put their securities at risk, the Iranian parliament speaker said.

Issues such as terrorism and drug trafficking can create problems for both countries and this requires close cooperation between the two sides, he said.

Language and cultural commonalities will persuade businessmen of both sides to engage in joint investment, Larijani added.

To attain the goal it sounds necessary to revise customs tarrifs as well as easing trade exchange between the two sides, the Iranian parliament speaker added.

He expressed the hope to witness further expansion of cooperation between the two countries.

Tajik vice parliament speaker, for his part, expressed the hope to witness further expansion of relations and cooperation between the two nations.

He also expressed the hope that all Muslim countries would live in peace and away from any tension.