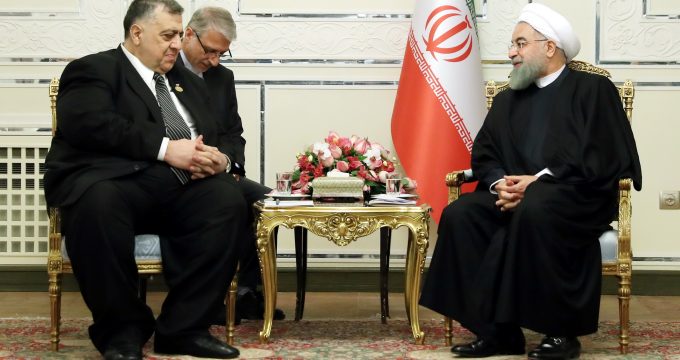 president.ir- The president met with the Speaker of the People’s Council of Syria Hammouda Youssef Sabbagh on Tuesday and emphasised that the two countries should boost efforts to develop and strengthen close, inclusive relations between Tehran and Damascus.

Dr Hassan Rouhani also expressed congratulations to the Syrian government, people and army on the great victories against the terrorists and the liberation of major cities of Syria, saying: “Of course, the fight against terrorism has not yet come to an end and should be continued with the same determination”.

Pointing out that the Iranian government and nation have always stood by the Syrian government and people, and will continue to do so, the President also expressed hope that the future of Syria will be on the path to peace and development for the nation.

The president also condemned the presence of American forces in Syria and US plots for the country’s future, adding: “The plot that the Americans recently have in mind for Syria is against international regulations and a conspiracy for territorial integrity and the security of Syria and the region”.

Dr Rouhani also went on to point out that the continuation of the fight against terrorists and the fight against foreign interference is an important issue for the Syrian people, saying: “We must work hard to bring Syrian refugees back to their homeland as soon as possible and begin the process of reconstruction of the country. In this regard, the Islamic Republic of Iran stands by the Syrian government and people”.

The process of negotiations and political measures that started from Sochi must be pursued and continued until the right of the people and the will of the Syrian people and government are fulfilled, Dr Rouhani continued.

The Speaker of the People’s Council of Syria Hammouda Youssef Sabbagh appreciated the Iranian government and people for supporting the Syrian people in the fight against terrorism, calling for continued support and assistance from the Islamic Republic of Iran for rebuilding of Syria.

“Syria has officially asked the US forces to leave the country and we never agree to their presence in Syria,” said Youssef Sabbagh, referring to US actions and plots for the countries of the region.