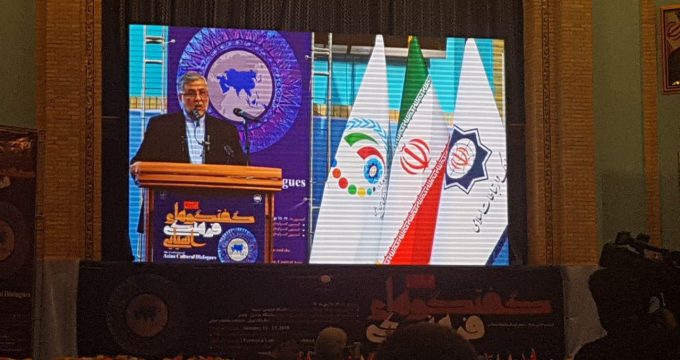 January 14, The Iran Project – The 1st Conference of Asian Cultural Dialogues opened in Tehran with 70 cultural and scientific figures from over 20 Asian countries in attendance on Saturday (Jan. 13).

Several high-ranking Iranian officials including Foreign Minister Mohammad Javad Zarif, Minister of Culture and Islamic Guidance Seyyed Abbas Salehi as well as Chairman of Iran’s Islamic Culture and Relations Organization, Abouzar Ebrahimi-Torkaman, addressed the conference and emphasized the need for holding discussions on cultural diversity and the potential and capacity for interaction.

Zarif described the cultural dialogue in today’s world as a vital necessity for security of all.

“It is regrettable that Asia, the cradle of culture and civilization, is today the land of crises, conflicts and massacre which are far from the Asian culture,” Zarif said.

Addressing the conference salehi stated that, “The idea of forming political coalitions, excluding others and considering those who are not with us as enemies have been imposed by the hegemonic powers on the world, the top diplomat said, adding such ideas have directed the world toward enmity, extremism and conflicts.”

Minister of culture and Islamic guidance stressed the necessity of arriving at a common understanding concerning mutual concerns and replacing monologue with dialogue, and called tolerance and welcoming different opinions the major mechanisms for multilateralism in cultural interaction.

“In cultural dialogues, finding similarities and overlaps becomes the high priority and if cultural interaction is built upon dialogue, it leads to mutual understanding between societies,” he added.

Meanwhile, Ebrahimi-Torkaman said culture is an essential element for coordination and convergence, adding that as an old continent, Asia can turn the variety of cultures into an opportunity for convergence and cooperation among the nations.

He noted that today’s world needs cultural dialogue which will be a proper way to settle international and regional problems effectively.

Following the regional meetings of the Asian Cultural Dialogues, which were held previously in India, Malaysia, and Kazakhstan, the first international edition of the conference kicked off in the Iranian capital, and will run through January 15 in three other cities, including Mashhad, Hamedan, and Babolsar.