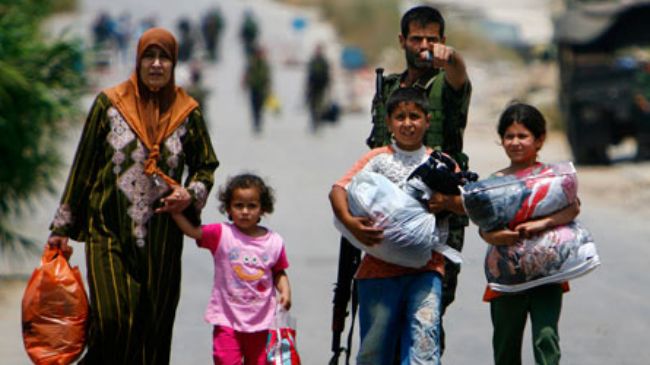 Press TV – A UN agency that delivers aid to Palestinian refugees has waned of a “catastrophic” impact on them if it loses significant funding from the US, days after American President Donald Trump threatened to cut his country’s aid to Palestinians.

“The human impact of losing significant funding could be catastrophic in the real lives of real people whom the UN is mandated to protect,” said Chris Gunness, the spokesman of the UN Relief and Works Agency for Palestine Refugees in the Near East (UNRWA), on Friday.

His comments came a week after Trump said that Washington might withhold future aid payments to UNRWA over what he called the Palestinians’ unwillingness to talk peace with Israel.

On January 2, Trump, in a number of tweets, threatened to cut Washington’s aid to Palestinians, currently worth more than $300 million a year, alleging that the Palestinian Authority was no longer willing to engage in the so-called peace talks with Israel.

According to UNRWA’s official website, the US is the agency’s largest donor with a pledge of nearly $370 million as of 2016.

“Palestine refugees are among some of the most vulnerable people in the Middle East. Our health services offer a life line, quite literally, to vulnerable women and children, the sick and the elderly,” Gunness added.

Established in 1949 with the mission of aiding Palestinian refugees, UNRWA provides educational and health services in the besieged Gaza Strip and the occupied West Bank.

“Even the most modest shock in a fragile society can have an inordinate impact and the consequences could be profound, widespread, dramatic and unpredictable,” Gunness further warned.

On Tuesday, Olof Skoog, the Swedish ambassador to the UN, also expressed his country’s concerns over the possible cutting of the US funding, saying the worrying move “would be very negative both in terms of humanitarian needs of over five million people but also of course it would be destabilizing for the region.”

Tensions between the US and Palestinians started escalating after Trump announced last month that Washington would recognize Jerusalem al-Quds as the capital of Israel and would relocate the US embassy in Israel from Tel Aviv to the occupied city.

The entire Jerusalem al-Quds is currently under Israel’s control, while the regime also claims the city’s eastern part, which hosts the third holiest Muslim site. The city has been designated as “occupied” under international law since the 1967 Arab War, which Palestinians want as the capital of their future state.

Palestinians condemned the decision, asserting that the US has no credibility as a Middle East peace broker. The dramatic shift in Washington’s policy vis-à-vis the city triggered demonstrations in the occupied Palestinian territories, Iran, Turkey, Egypt, Jordan, Tunisia, Algeria, Iraq, Morocco and other Muslim countries.

At least 14 Palestinians have been killed and around 3,000 others injured during protests that have ensued the announcement.

On December 21, the United Nations General Assembly overwhelmingly voted in favor of a resolution that called on the US to withdraw its controversial recognition of Jerusalem al-Quds as the Israeli capital, while US Ambassador Nikki Haley wielded Washington’s veto against the call, prompting the Palestinian government’s strong condemnation.