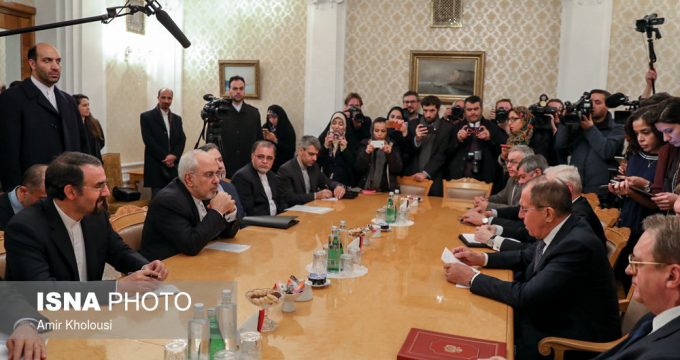 January 11, The Iran Project – Iranian Foreign Minister Mohammad Javad Zarif, heading a high-ranking delegation, arrived in Moscow on Wednesday (Jan. 10) ahead of his trip to Brussels to meet the EU’s top diplomat Federica Mogherini and the foreign ministers of UK, France, and Germany.

As it draws nearer to the deadline of Trump making decision about the nuclear deal of 2015, the foreign minister of Iran paid a visit to Mosow and Brussels to review the implementation of the JCPOA (the Joint Comprehensive Plan of Action signed by Iran and 5+1 in Vienna on July 14, 2015).

The JCPOA which is also known as the Iran nuclear deal has been supported by all sides except US after the new US President Trump got into office.

Talking to Zarif, Lavrov said that Iran has fully adhered to its commitments under the 2015 nuclear deal and fulfilled them.

“We have held many meetings in the past and this is very important and we are happy that the two countries’ presidents visited each other’s countries earlier,” he added.

Noting that implementation of JCPOA is very significant; Lavrov said that the director general of the International Atomic Energy Agency (IAEA) has also verified Iran’s compliance with the deal.

“We will support implementation of JCPOA non-proliferation of weapons of mass destruction,” Russian FM noted.

Zarif, for his part, called for international cooperation to save JCPOA, adding that, “We, you and other members of the JCPOA should closely coordinate with each other and ensure that this achievement would be seriously pursued.”

He referred to Iran’s commitment to the JCPOA, and said that unfortunately, one of the G5+1 member-states has not remained committed to its obligations and has adopted destructive policies in this regard.

Talking to reporters in Moscow, Zarif slammed US House of Representatives for its anti-Iran resolution in support of recent unrests in the country, reiterating “US words have no weight with anybody including the Iranian nation.”

“We rely on our nation more than anybody and have always said we are indebted to the people for our security, peace and economic progress,” Zarif stated.

In reaction to US President Donald Trump’s likely decision on the JCPOA in the coming days, he said that one of Trump’s policies is his unpredictability. Of course he has adopted this policy to such an extent that the US is no longer reliable even among its partners.

It is unlikely that even Trump himself knows what he might do, and even the Europeans do not know what the US president will do, Zarif said.