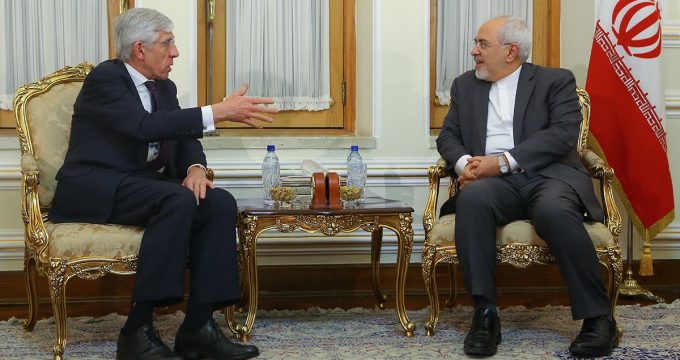 In a meeting with Zarif, Straw said that Britain is vehemently supporting the implementation of the nuclear agreement, reiterating that British politicians are strongly opposing US attacks on the nuclear accord.

The two sides discussed a diverse range of areas including the issue of JCPOA (the Joint Comprehensiove Plan of Action signed by Iran and 5+1 on July 14, 2015, in Vienna AKA Iran nuclear deal) and regional developments.

Talking to Straw, Salehi said that the present conditions are a result of US President Donald Trump’s mental confusion and added that Iran will nevertheless make decisions according to its own interests.

In this meeting, the two sides discussed various issues such as bilateral relations, JCPOA and regional concerns.

Salehi said despite problems that arise, the Islamic Republic of Iran takes into account the current conditions and makes decisions that protect its own interests.

In a meantime, British ambassador to Iran Nicholas Hopton said the UK government has been committed to Iran nuclear deal and will implement it completely.

Addressing the Strategic Council on Foreign Relations meeting in Tehran, the British diplomat said interaction with Iran is based on JCPOA and supporting nuclear accord is UK position.

The UK government believed that Iran’s internal affairs are related to the country and freedom of speech and freedom of expression and protest are the rights of people, Hopton added.