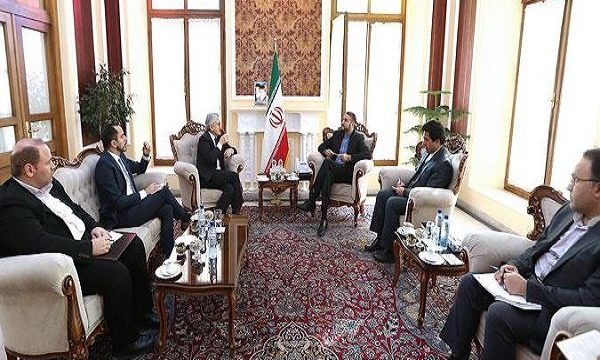 EU countries need to Keep distance with US on JCPOA

During the meeting with Massimo D’Alema, Amir-Abdollahian praised the friendly relations between Iran and Italy, adding that the two countries can expand their relations in all political, economic, and trade fields and they also need to accelerate their parliamentary relations.

Referring to the current developments and crises in the region, he emphasized on political dialogue to solve the regional problems.

Expressing his strong dislike for the policies of US President Donald Trump and some of his allies in the region, Amir-Abdollahian said “the US government’s overt and covert support for the terrorist groups and its wrong policies have caused insecurity and instability in the region and beyond.”

Amir-Abdollahian added “in the last decade, some countries in the region have been encouraged by the United States and the Zionist regime to fight each other instead of cooperation.”

Emphasizing the important role of the EU member states, including Italy, in the Middle East peace process, he said ” through moving away from US false politics, European countries can understand the r situation in the region better and play a constructive role in stabilizing it and preventing violence and extremism.”

Elsewhere in his remarks, Italy’s former prime minister described the nuclear deal between the Islamic Republic of Iran and the 5+1 as an opportunity for developing political and economic relations among the parties, saying that Iran’s compliance with the deal has resulted in the expansion of transactions between the two sides.

D’Alema reminded “EU countries, especially Italy, are interested in improving their relations with the Islamic Republic of Iran.”

He went on to emphasize the need for political dialogue to solve regional crises, adding that selling weapons to aggressor states in the region should be banned.