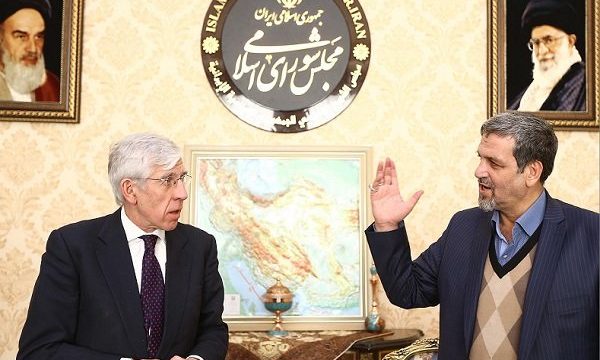 Era of foreign interference in Iran over

MNA – Head of Iran, Britain Parliamentary Friendship Group met with Jack Straw and voiced his protest to the stance adopted by Britain in the Security Council on recent protests in Iran and said that the era of foreign interference in Iran is at an end.

Jack Straw highlighted the role played by parliaments in facilitating bilateral cooperation. He referred to the time when Iran, Britain relations were strained and said that in that time the Parliaments and Parliamentary Friendship Groups took the first steps to improve ties.

He discussed the positive influence of JCPOA on bilateral cooperation and said that Britain sees JCPOA as an important, influential document in maintaining international peace and security and supports honoring it and its contents.

He said that the British side is aware of the banking obstacles on the way of bilateral economic cooperation, and expressed hope that current negotiations between banking officials of the two countries can remove the said obstacles.

In conclusion, the Former UK Foreign Secretary said that the UK Parliament and public are strongly determined to establish and improve relations with Iran and stressed that the support given by the UK to JCPOA can be looked at in this light.

For his part, Lord Lamont stressed the necessity of promoting bilateral cooperation in areas such as healthcare and the banking system.

Head of Iran, Britain Parliamentary Friendship Group Kavakebian pointed to the long history of relations between the two countries and said “after a period of stagnation, JCPOA led to the recommencement of bilateral relations and major development has been made in economic, political aspects.”

“Using the opportunities provided through JCPOA depends on the stance adopted by the UK and the will of its leaders to improve relations. In case such conditions are provided, we can expand cooperation on mutual economic interests,” he added.

Kavakebian slammed the antagonistic policies adopted by the US and its interference in the domestic affairs of Iran taking them to the Security Council and said “we condemn US intervention in our domestic affairs and will not allow any country to meddle in our issues. Our people started a revolution in 1979 in order to be able to take their destiny in their own hands. The era of foreign interference in Iran is at an end.”