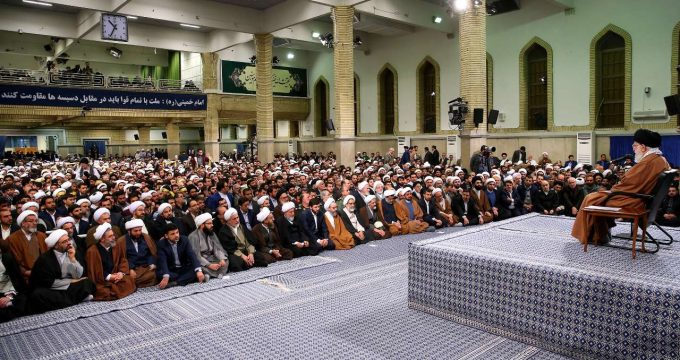 Triangle of enemies behind recent unrest in Iran: Ayatollah Khamenei

Leader of the Islamic Revolution Ayatollah Seyyed Ali Khamenei says a “triangle” of enemies, including the US, a Persian Gulf government and the MKO terror organization, has been plotting over the past months to foment chaos and violence in Iran.

Iranian President Hassan Rouhani issued an order regarding mobilization of all the national forces to accelerate search operation for finding the missing crew of the stricken Iranian oil tanker.

Iranian defense minister urged the western powers to understand the realities on the ground and the changes in West Asia region.

The first congress in commemoration of the former Iranian president and chairman of the country’s Expediency Council, Ayatollah Akbar Hashemi Rafsanjani, opened in Tehran on Tuesday with high-ranking officials in attendance.

Supreme Leader: US to pay price for inflicting damage on Iran

Supreme Leader of the Islamic Revolution Ayatollah Seyed Ali Khamenei blamed the US, the Zionist regime, certain regional states and Mojahedin-e Khalq Organization (MKO, also known as the MEK, PMOI and NCRI) for the recent riots and unrest in Iran, warning Washington of Iran’s response.

Spokesman for the UN Secretary-General on Tuesday reaffirmed António Guterres’ unwavering position on supporting and continuing the 2015 Iran nuclear deal despite US lack of commitment.

According to reports rolled out by Asian papers, Iran-ASEAN trade has gone through a period of significant growth in the period between January and November 2017.

OPEC members not keen on oil price hikes above $60/b: Iran

Iranian Minister of Petroleum Bijan Zangeneh said, “Members of the Organization of the Petroleum Exporting Countries (OPEC) are not keen on increased Brent Crude prices to above 60 dollars per barrels because of shale oil.”

Supreme leader of the Islamic Revolution Seyyed Ali Khamenei on Tuesday stressed the need to separate ‘people’s honest and rightful demands from the violent and vandalizing moves by a certain group’.

Iranian Supreme Leader’s top aide for international affairs Ali Akbar Velayati played down the US attempts to separate the Kurdish areas from Syria, stressing that the resistance front will prevent Syria’s disintegration.