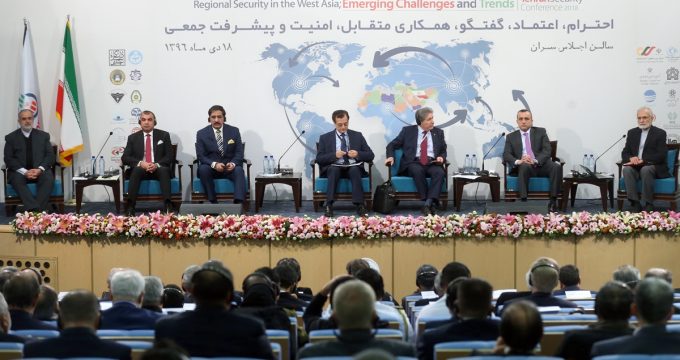 MNA – In the final statement issued by the Tehran Security Conference, the participants stress that foreign intervention has not brought about security in West Asia region, cautioning the region’s security cannot be imported from outside.

At the beginning of the statement, the participants of the one-day conference entitled ‘Regional Security in West Asia; Emerging Challenges and Trends,’ call for respect, trust, dialogue, mutual cooperation, security and collective progress in West Asia, highlighting that the region is going through a sensitive period.

According to the statement, the threats of terrorist and takfiri groups such as ISIL have lost their momentum through cooperation of the countries of the region, but due to wrong policies of some powers in the region and beyond including US president’s policies, the security of the region is facing emerging threats, the most important of which are: unprecedented arms race, the military intervention of powers from outside the region, securitization of identity and religion, incompetent governance, extremism and terrorism, cyber terrorism, economic underdevelopment and environmental risks.

The statement adds “to deal with these challenges and security threats, West Asia needs comprehensive collective security arrangements that are acceptable to the countries of the region.”

The participants go on to add “collective and shared security in West Asia will be achieved through engagement and cooperation of all the countries of the region.”

The statement emphasizes on the Palestinian people’s legitimate rights, including the right to return to their territories, and calls for putting an end to occupying policies of Zionist regime and forming a Palestinian state with Al-Quds as its capital.

The One-day security conference on West Asia region’s security challenges and trends was held in Tehran on Monday with more than 200 Iranian and international political figures in attendance.