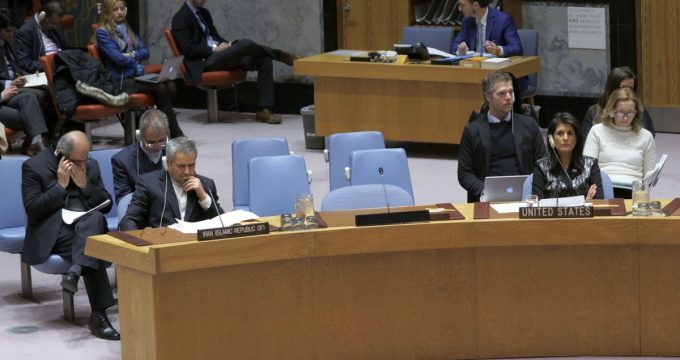 January 7, The Iran Project – The UN Security Council (UNSC) finally gives into a US push for a meeting on the latest events inside Iran, but the session does not go as planned as the council’s veto wielders and Washington’s own allies use the debate to criticize the White House for involving the council in Iran’s internal affairs and seeking to link those issues to the 2015 multinational nuclear deal.

At Friday’s session, US Ambassador to the UN Nikki Haley gave an exaggerated account of a series of scattered riots in some areas in Iran last week, and said Washington would remain steadfastly behind the Iranian “protesters,” attempting to bring other UNSC members onboard with Washington against the Islamic Republic.

In addition to mentioned countries, the move was also condemned by China, UK and France.

On Jan 6, Iran’s Ambassador to the United Nations Gholam Ali Khoshroo censured the United Nations Security Council’s debate on the recent protests in Iran, describing it as “another desperate attempt by the US administration to escape forward”.

“This is nothing but another desperate attempt by the US administration to escape forward, as it has lost every shred of moral, political and legal authority and credibility in the eyes of the whole world,” Khoshroo noted.

Meanwhile, Umarov said that every member present at the meeting “supports and understands the importance of stability in Iran and the Middle East by reducing violence and preventing the emergence of new tensions.”

Wasllström said in a statement about recent unrest in Iran that she had rejected the US proposal to bring Iran’s case to the Security Council.

Pointing out that her government is monitoring the internal situation in Iran, Wasllström has reportedly said “the UN Security Council is responsible for issues related to international security and peace, meanwhile there are other ways to deal with the current situation in Iran.”

US administration has not been successful in taking advantage of recent riots in Iran to its own benefit, Russian senator stated.

“The Security Council session on Iran will not affect the course of events in this country. But the US needs it to question the ‘nuclear deal [Iran deal known as Joint Comprehensive Plan of Action (JCPOA)]’, the Russian senator added.

He described foreign policy of the Trump administration as tensions with the EU, the isolation on Jerusalem [Beit ul-Muqaddas], the failure of the UN Security Council on Iran, and difficulties with China.

Moreover, Turkish Foreign Minister Mevlut Cavusoglu said on Saturday (Jan. 6) that security and stability in Iran is so important for Turkey that his country opposes interference of foreign powers in Iran’s domestic affairs.

He told reporters that determination of Iran’s fate and any change in its sovereignty should be done by its own people and interference of foreign powers could be a danger for Iran’s security and stability as Turkey is strongly opposed to it.