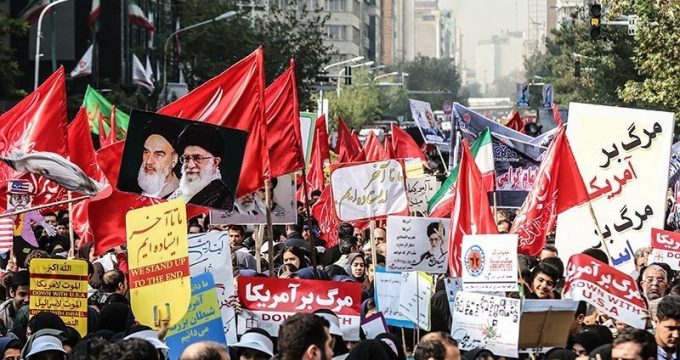 IRNA – A British journalist says the ‘support and sympathy’ expressed by US President Donald Trump for the Iranian people is all deceit and a tool to hide US imperialistic goals in Iran.

“Donald Trump and John McCain now ‘support’ the Iranian people, despite having approved of US sanctions on Iran, knowing full well they would harm the ordinary Iranian. The likes of Trump and McCain simply see the Iranian people as potential subjects of the US,” British political journalist and the founder and editor of Politics First magazine Marcus Papadopoulos said in a recent Twitter message.

Elaborating on the recent incidents in Iranian cities, he said, “Protests in Iran followed by a terrorist act in the country. Western-backed subversion in Iran has long been the most realistic threat to the Iranian authorities, instead of an invasion of the country by western armies. And the threat is all the more serious now because of Trump.”

After some Iranians took to the streets to protest against the unemployment and high prices, and, with the provocation of certain foreign and anti-Islamic Revolution media, some elements penetrated the lines of protestors to drive the peaceful protests towards violence, and US President Donald Trump overtly supported the rioters assuming that the former US administration had made a mistake about Iran riots in 2009.

“Firstly, the protests in Iran were nowhere near the scale that the West was portraying them as. Secondly, why didn’t the US call an emergency meeting of the UNSC when protests in Bahrain were brutally crushed by Saudi forces, in 2011? I think any enlightened person knows why,” he added.

Following the recent riots, United States Ambassador to the United Nations Nikki Haley, whose animosity is as clear as daylight and tries to push Iran on top of the UNSC agenda through different subjects so that the Zionist regime can get rid of the international pressures and breathe a sigh of relief, was assigned to make scene against Iran in front of the press.

The UNSC members, feeling what she was going to do, did not let her misuse this opportunity for political ends, such as harming Iran Nuclear Deal, officially known as the Joint Comprehensive Plan of Action (JCPOA) and warned against it.

“To those people in the West who pride themselves on their so-called commitment to human rights, I say this: Where were you when the Saudis sent their soldiers into Bahrain to massacre innocent civilians protesting? In fact, where are you when it comes to Saudi Arabia per se?,” he noted.

Referring to US President recent provocative Tweets on supporting rioters in Iran, Papadopoulos said, “Donald Trump is as committed to democracy as his friends the Saudis are committed to allowing churches in Saudi Arabia. Furthermore, the world is watching Trump…and he bitterly knows this.”

“Conservatives and liberals in America and Britain are all alike. Imperialism runs deep in their veins. They, together with their Islamist allies, principally Saudi Arabia, are steeped in the blood of peoples of the world,” he reiterated.