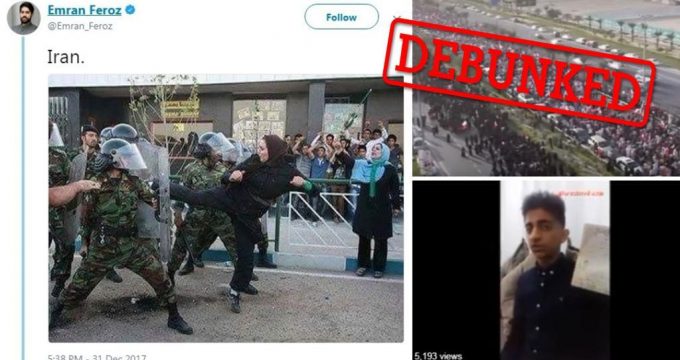 observers.france24.com– Since December 28, 2017, a wave of protests has swept Iran. Citizens have broadcast dozens of videos online showing the demonstrations and the resulting police crackdown. As ever in these kinds of situations, there have also been many fake photos and videos circulating, not only on social media but also mistakenly shared by journalists and in mainstream media across the world. The FRANCE 24 Observers team has done a round-up of some of the most widely shared fake images around the Iranian uprising.

Iranian women may be brave – but this one is an actress

This photo showing an example of “brave Iranian women” who fight back against the heavy-handed crackdown by the authorities has been touted as one of the most inspiring images to come out of the uprising. Many journalists have shared it on Twitter or Facebook.

But the photo actually comes from the state-funded film “Golden Collar”: a piece of propaganda against the 2009 “Green Movement” uprising that was screened in cinemas in 2012. During the Green Movement, thousands of Iranians hit the streets to demand a vote recount in the presidential election, convinced that the reformist candidate Mir Hossein Moussavi must have won against the ultraconservative candidate Mahmoud Ahmadinejad, who had been declared the winner. The protests were brutally repressed.

However, it’s clear that the video was not taken in Iran. Iran’s riot police wear a different uniform with a different style of helmet, and unsurprisingly enough they don’t have the Spanish word for police – “Policia” – written across their jackets. According to a Mexican media, this video was actually taken in Mexico on December 26, 2017, and shows Mexican police robbing some mobile phones from a shop.

Amir Hosein Papi, a 13-year-old boy from the town of Dorud in the east of Iran learnt from social media that he was apparently dead. The news was shared by some Iranian media outlets and some internationally famous Iranian journalists. To prove that he was, indeed, alive, he filmed himself and published the video on social media.

Victims from an attack in Egypt

A pro-uprising Telegram channel with over 1 million followers misappropriated photos of dead people. After 21 people were announced to be dead as a result of the protests, Telegram published photos of who they said were the victims. The photos actually showed the victims of an attack on New Year’s Day in Cairo, Egypt.

In this tweet, this user whose profile describes him as a “Zionist, Trumponomics Expert and Host of the Offended America Podcast”, claims that protesters are heading toward Iran’s Supreme Leader Ayatollah Khamenei’s residence. There has been absolutely no mention elsewhere of protests in the south of Tehran around the Ayatollah Khamenei’s home, either in social media posts, or in reports by foreign or Iranian media outlets.

According to our Observers in Tehran, videos put on social media and reports by international news outlets like the BBC, the protests and clashes since December 31 have been located in the centre of Tehran – at least seven kilometres away from Khamenei’s residence.

Many users published a video that was actually filmed in Bahrain and which said showed the protests in Iran. Not only was the video published by a Bahraini account, but Bahraini flags can be spotted everywhere in the video.

The video shows a protest against Bahraini authorities on February 22, 2011.

This is another example of a video taken in a different country – in this case in Argentina – and presented as showing a protest in Iran. However, the person behind the Twitter account that posted it describes himself presented himselfas a “pro-Israel” and former Israeli army soldier. The fake video has been retweeted over 1,200 times.

In reality the video was taken in December 2017 in Argentina’s capital Buenos Aires, and shows protests against a new government pension policy. There are people speaking in Spanish in the background of the video.

A symbol of the protests – but a different protest altogether

A photo of a woman in a Tehran street brandishing her hijab was one of the first photos from the protests to go viral. Many activists, social media users and journalists shared it. The woman in the photo is indeed defying the mandatory hijab policy in Iran – but the photo was taken on Enghelab street in Tehran on December 27. The uprising began in the town of Mashhad in the north east of Iran on December 28, so has nothing to do with this particular woman’s protest.