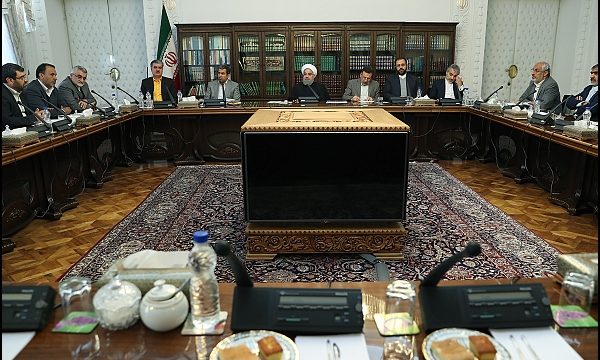 Press TV- Iran’s President Hassan Rouhani says the Iranian people will deal with a “small and minority group” of rioters and lawbreakers exploiting the protests against economic conditions in a number of Iranian cities in recent days.

Speaking in a meeting with a number of Iranian lawmakers on Monday, Rouhani said the nation would counter the small group that has used protests as an excuse to chant slogans in violation of the law and people’s demands, insult the sanctities and values of the Islamic Revolution, and damage public property.

“The enemy will not remain silent vis-à-vis the nation’s progress and greatness, but there are also deceived people among the protesters who have rightful demands,” he added.

The Iranian chief executive emphasized that the enemies of Iran could not tolerate the country’s achievements in the diplomatic arena, particularly in the confrontation with the US and the Israeli regime, and some of them had explicitly threatened that they would take regional problems into Tehran.

Rouhani stressed the importance of reinforcing national unity, particularly among the three branches of the government, as the best way to tackle such issues and the people’s problems.

“I believe that what happened in recent days was apparently a type of threat, which should be turned into an opportunity,” the Iranian chief executive said.

He noted that not all of those partaking in the protests were taking orders from foreigners and there was in fact a group of people who poured into the streets because of their “sentiments and problems.”

Since Thursday, groups of Iranian protesters have staged protests in several cities to voice their anger over rising prices and economic conditions. Sporadic violence has erupted during the protests, causing a number of deaths.

Addressing a Cabinet session on Sunday, Rouhani said the Iranian people were completely free to express their criticism of the government or stage protests according to the Constitution and citizenship rights, and in a way that would lead to the improvement of the country’s conditions.

The Iranian president says people are completely free to express their criticism or stage protests according to the constitution.

“We are a free nation and based on the Constitution and citizenship rights, people are completely free to express their criticism and even their protest,” he said, reiterating that the manner of expressing criticism and protest must lead to the improvement of the country’s conditions and people’s lives.