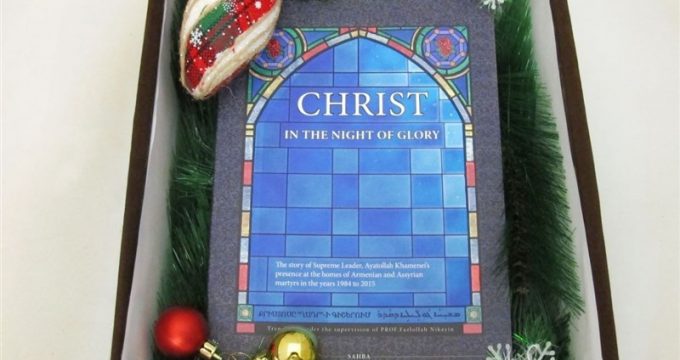 Tasnim – An Iranian publication has sent the English version of “Christ in the Night of Glory”, a book which features the meetings between the Leader of the Islamic Revolution and the families of Iranian Christian martyrs, to Pope Francis and UN Secretary General Antonio Guterres.

Iran’s Sahba Publication Co. sent two copies of “Christ in the Night of Glory” to Pope Francis and Guterres ahead of the New Year.

In a letter that accompanied the book, it has been said that the book narrates the story of Ayatollah Seyed Ali Khamenei’s visits to the homes of Iran’s Christian martyrs from 1984 to 2015.

“In today’s conditions and with the emergence of fake and violent copies of Islam, the introduction of this sample of the beautiful and cordial relationship of true Muslims and the followers of Christ can reveal the beautiful face of the Islamic Establishment to the world,” the letter said.

“Christ in the Night of Glory” is the second book in the series “Sunshine at the Landing Site of Angels”, and narrates the stories in 23 sections.

They include the Leader’s meetings with the families of several Armenian and Assyrian martyrs – mostly killed during the Iraqi imposed war on Iran – such as Richard Ibrahim, Albert Allahdadian, Zurik Moradiyan, and Galost Bayomi.

The 400-page English version has been translated under the supervision of Professor Fazlollah Nik-Ayeen.