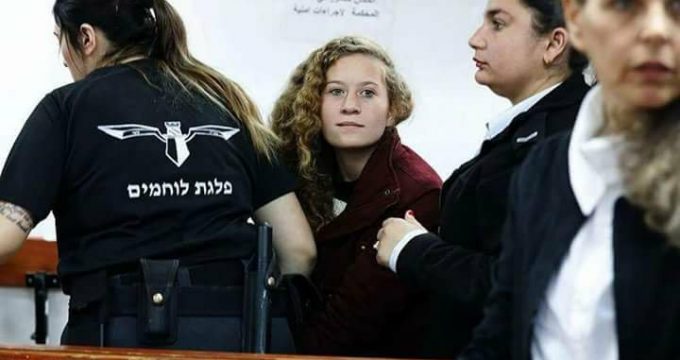 Israelis are used to images of Palestinians with bullet holes in them bleeding, not standing up against their bully

American Herald Tribune | Miko Peled: “In the case of the girls the price must exacted at another time, in the dark, without witnesses and cameras.” Israeli journalist Ben Caspit writing about the Nabi Saleh case where girls kicked and slapped an IDF officer who invaded their home. In his piece he congratulates the officer who didn’t respond to the slapping and kicking. He continues to say that the Tamimi family must learn the hard way that provoking IDF fighters will cost them dearly. The IDF has creative abilities with which to exact a price in ways that will not damage its image

Reading the Israeli press, one is reminded of the story where an evil Jinn came in to a city one day and poured a drug into all the wells of that city. The drug made all who drank the water from the wells mad and it wasn’t long before all the citizens of the city became mad. But the king who also resided in the city had his own water well on the grounds of his palace and so his water remained pure. One day while walking through the city the citizens looked at the king and exclaimed: “Look the king is mad, we must detain him!” When the king heard this, he realized what the evil Jinn had done, he rushed to nearest well and drank from the city’s water.

Israeli media is a world of fantasy. But it’s not a pretty fantasy it is a freighting one where Israeli treatment of Palestinians is characterized as “restrained.” In the summer of 2015 a video of an Israeli soldier armed with a semi-automatic assault rifle and wearing a ski mask was chasing a young Palestinian boy with a broken arm down a rocky hillside. This took place in the Palestinian village of Nabi Saleh in the West Bank. The soldier managed to catch up with the boy, choked him, lifted him up and then threw him on a rock, then he tried to bend or perhaps break the boy’s other arm. Eventually the boy’s sister, Ahed Tamimi, his mother and other women from the village come to the boy’s aid and after a long struggle manage to save the boy from the soldier’s hold. In the process, they also managed to remove the ski mask and expose the soldier’s face. If there is one thing clear is that the soldier was anything but restrained. In the end another solider shows up, hits one of the women and rescues the solider at which point out of pure revenge the soldier takes out a tear gas grenade and throws it at the boy and the group that rescued him. In an interview to the Israeli press the soldier’s father said he was proud of his son’s restraint.

Like everything else in life, it’s all a question of relativity. Israelis are used to seeing their enemies pay a hefty price when they dare to raise their heads. It just so happened that once again in the village of Nabi Saleh, in a case that involved the Tamimi family in a case involving an officer this time, the Israeli army showed “restraint” which was mostly met with disapproval. Israelis are used to images of young Palestinians with bullet holes in them bleeding by a checkpoint as Israeli soldiers and sometimes settlers stand by looking at them die slowly and are unmoved. Executed efficiently because, as MK Dr. Ahmad Tibi said during a speech on the floor of the Knesset, they were suspected of carrying scissors or a small knife, or something that resembles a small knife. The Israeli culture is used to this being the standard. But in the case of Ahed Tamimi, the army, the press and the politicians are up in arms – because this was abnormal.

Ben Caspit in his piece repeats one claim that is repeated all over the Israeli media – that every Israeli felt the pain when the officer was slapped by the girl and did nothing. Ben Caspit says this officer did the right thing and that at another place and another time Israel must exact a price from the “Tamimi girls” as he calls them. Another Israeli journalist, Israel Eldad, a veteran journalist touches on another very sensitive point. He says he hopes that the prosecution will act decisively and demand a lengthy prison sentence for Ahed Tamimi, and that she will spend many long years in prison. He explains that this will teach the Arabs that the land belongs to Israel and they cannot just slap us around and get away with it. That this sort of “chivalrous behavior” may have been proper a long time ago but not in this case. Here it is about making sure that the Arabs know there is no doubt we have a right to that land, including Ahed Tamimi’s house, out of which she kicked the officers.

There are so many layers to this story that one can write pages upon pages and it will never end. A young girl slapping a man who has invaded her home, her space and even though not in this case, but many, many times her privacy. Night raids by the Israeli military into civilian homes when people are asleep in their beds, are very common and Ahed has experienced this countless times. Then the image of an Arab girl slapping an Israeli, a woman slapping a man, and while images of dead Palestinians, even children or Palestinian children detained by armed soldiers do not create such a public outcry, the reactions to this one were guttural. By the way, no such reactions were seen when a week before Ahed’s case her 15-year-old cousin Mohammad Tamimi was shot in the head. “We gave up hope” his father Bilal told me, but then, by the grace of God after six hours in surgery doctors were eventually able to take the bullet out of his head and Mohammad is recovering at home.

To add to the claims that Israel is restrained in its reactions, Knesset Member Oren Hazan, who has been accused of a variety of charges from sexual abuse of women working with him to violent assaults and even reckless driving, had recently boarded a bus with families of Palestinian prisoners. The bus was on its way to a military prison when MK Hazan boarded it and began insulting the families. If anyone was showing restraint here it was the families. And as we look at Palestinian reaction to Israeli oppression, intimidation, and abuse for over seven decades it is clear that the Palestinians are those who are restrained. Israel does not need to exercise restraint because having the support of the US, the European governments and even Arab and Muslim governments, it is able to get away with murder.