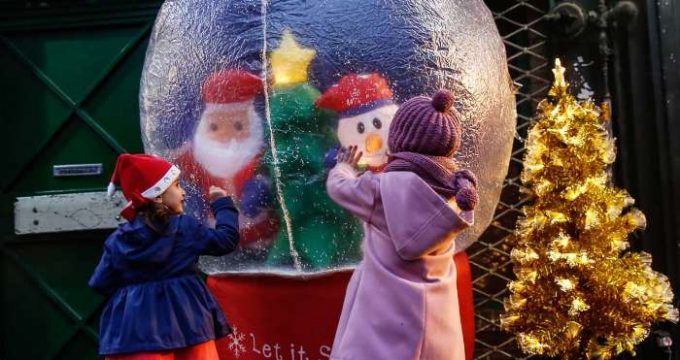 December 25, The Iran Project – Several top Iranian officials in separate messages congratulated the Christians worldwide on the auspicious birth anniversary of Jesus Christ (PBUH) and commencement of the New Year ‘2018’.

On Sunday  (Dec. 24) President Hassan Rouhani congratulated followers of Jesus Christ on Christmas, saying that Christmas is reminiscent of his heavenly teachings.

Describing Jesus Christ as the prophet of monotheism, spirituality and kindness, Rouhani said that the great prophet’s birth was an unprecedented kind of birth which has been characterized as an example of divine miracles by the Holy Qur’an.

Meanwhile, in his message to Pope Francis, pope of the Catholic Church, President Rouhani expressed the hope that to witness eradication of filthy, obscenity, discrimination and poverty for the entire humanity.

Parliament Speaker Ali Larijani in another congratulatory message pointed to holding negotiations among followers of divine religions as a necessity in today’s world to reach peace, justice and progress.

Foreign Minister of Iran Mohammad Javad Zarif also in a message hopes that all would accept Christ’s global message of peace in the new year.

“The angles said, Mary, God gives you glad-tidings of a Word from Him whose name is Christ, Jesus, son of Mary; highly honored in this world and the next’ Quran 3:45. A very happy and peaceful Christmas to all. May Christ universal message of peace be embraced in the coming year,” Zarif said in a Twitter message on the eve of the new Gregorian year.

Foreign Ministry Spokesman Bahram Qasemi also congratulated the Iranian Christians who for centuries have lived in peace with their Muslim compatriots and followers of others divine religions.

Doubtlessly, he said, after the defeat and elimination of Daesh, one of the most reactionary terrorist groups that was one of the most visible manifestations of Wahhabism in the current era, the world will be safer and more beautiful for all Christians in the world in the coming year.

Iran’s 1st Vice President Eshaq Jahangiri also wished peace, calmness, happiness and success for the followers of the divine religions around the globe.

Moreover, Chief of Staff of the Iranian Armed Forces Major General Mohammad Baqeri in separate messages on Saturday (Dec. 23) congratulated world military officials on Christmas and the beginning of the new Christian year.

In these congratulatory messages, General Baqeri said undoubtedly humanity’s return to the teachings of divine religions and holy prophets, next to the boosting of friendship, fraternity and interaction among all nations, will improve the peace and stability, and would lead the humanitarian community towards truth and justice.