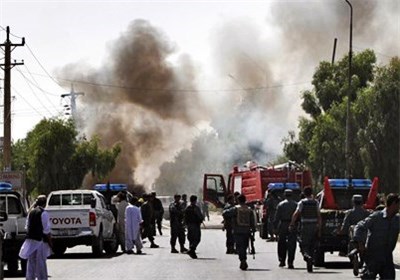 Press TV – At least six civilians have been killed and three others wounded in another Daesh bomb attack near an Afghan intelligence agency compound in the capital, Kabul.

Afghan Interior Ministry spokesman Najib Danish said a bomber blew himself up near the entrance of the compound belonging to the National Directorate of Security (NDS) in Kabul on Monday.

The attack took place at a time when employees were arriving at their offices.

“Six people were martyred and three others were wounded,” Danish said. “They were hit when they were passing the area in their Toyota sedan vehicle. We still do not know the target of the attack but it happened on the main road.”

There were also women among the victims.

Last week, an NDS military training center came under attack by Daesh gunmen, who stormed the facility and engaged in gun battles with Afghan security forces. That assault was repelled and the three attackers were killed after three hours of fighting.

Daesh first emerged in Afghanistan in 2015. The Takfiri outfit has recently expanded its presence in the war-torn country after losing its territorial defeats in Iraq and Syria.

The terror group has scaled up its attacks in Kabul, targeting, in particular, the country’s Shia Muslims and security forces.

The Afghan Defense Ministry said earlier this month that the military plans to launch a major operation against Daesh in the northern provinces of Sari Pul, Faryab and Jowzjan, where reports say foreign militants, including French nationals, are joining the ranks of Daesh.

Zamir Kabulov, Russia’s special presidential envoy for Afghanistan, warned on Saturday that an estimated 10,000 Daesh terrorists are currently present in Afghanistan, and that their number is growing due to the relocation of the terror outfit from the Middle East to Central Asia.

This is while Afghanistan has already been grappling with deadly violence fueled by the local Taliban militant group.

The spike in violence across Afghanistan comes despite the presence of American and NATO forces on the ground there.