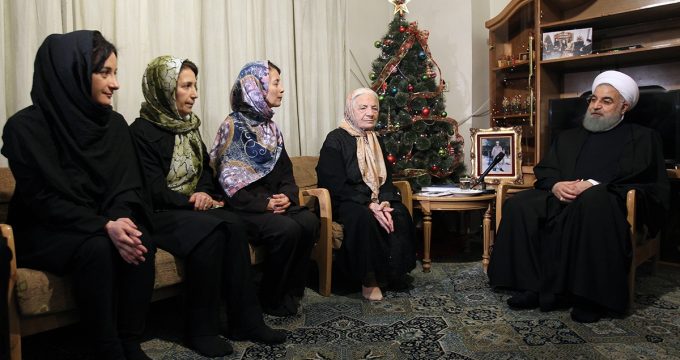 MNA – Iran’s President Hassan Rouhani visited family of Armenian martyr Georgekeshish Harutun on Christmas Eve and spoke with them in a cordial atmosphere.

In the visit that took place late on Sunday, Dr Rouhani congratulated birthday of Jesus Christ (PBUH) expressing hope that character and teachings of Jesus Christ can lead humanity to peace and peaceful coexistence.

Saluting patience and self-sacrifice of families of great martyrs, the President said the entire Iranian nation defend blood of our dear martyrs who defended the Iranian land by giving their lives.

Dr. Rouhani also stressed that in Iran, all religions and ethnic groups stand by each other in happiness and sadness, saying “our people have always stood by each other and will continue to do so.”

Referring the conditions of Christians in the Middle East, the President said “Christians have suffered a lot of damages in Iraq, Syria and Lebanon from terrorists and this was also the case for Muslims.”

Therefore, terrorists created conditions in which fates of Muslims and Christians became interwoven more strongly requiring both sides to assist each other more than the past, he underlined.

Martyr Georgekeshish Harutun’s mother and sisters also expressed happiness over meeting with President Rouhani and shared with him memories of the martyr.

During the session, which was also attended by Vice-President in Martyrs and Veterans Affairs Shahidi, plaque of appreciation was given to the family of the martyr.