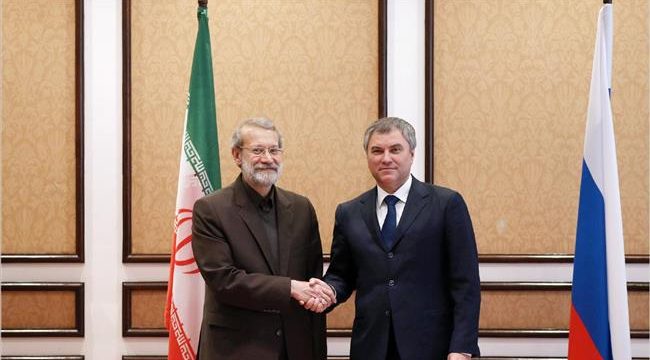 Tasnim– Iran’s Parliament speaker denounced the presence of US military forces in Syria, saying such a “destructive” role would obstruct the peace process in the Arab country.

In a meeting with chairman of Russia’s State Duma in Islamabad on Sunday, Ali Larijani slammed the “destructive” role of American forces in north of Raqqa, saying it would cause troubles for the future of Syria.

Calling for closer political interaction between Iran and Russia for regional security and peace in Syria, Larijani said the Astana process for the settlement of the Syria crisis has proved much more effectual than the Geneva initiative pursued by the European Union.

The Geneva process does not seem to produce any successful results for the future of Syria, because it has actually stifled the political activities, Larijani added.

The meeting came a few days after conclusion of the 8th round of Syria peace talks in Astana, sponsored by Iran, Russia, and Turkey.

Larijani has joined his counterparts from Pakistan, Russia, China, Turkey and Afghanistan in Islamabad for a two-day meeting to discuss and address the challenges of terrorism and inter-regional connectivity.

Iran and Russia have cordial ties. They have helped Syria in its fight against foreign-backed terrorism.

Tehran and Moscow cooperation has led to decline of foreign-sponsored terrorist groups in the war torn country.