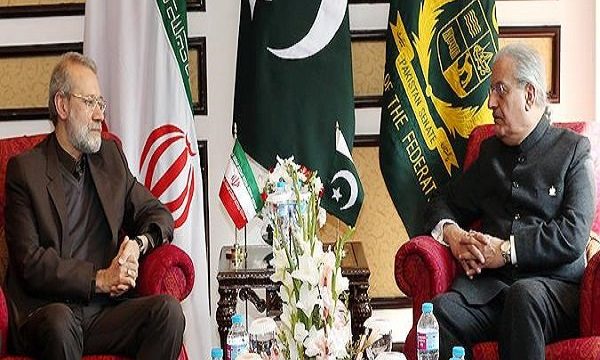 MNA – Iranian Parliament Speaker Ali Larijani told his Pakistani counterpart Mian Raza Rabbani that Americans are hatching plots in the region and some gullible countries of the region fall in their trap.

“The Americans are after sacking the Islamic countries and that’s why they have new plots and some countries get deceived by them,” said Ali Larijani, the Speaker of Iranian Parliament.

The Iranian top parliamentarian made the remarks during his meeting with Mian Raza Rabbani, the Chairman of the Senate of Pakistan. The two top law-makers met on Sunday in Islamabad, on the sidelines of the first Speakers’ Conference hosted by National Assembly of Pakistan.

The three-day event, running from 23 to 25 December, gathers together speakers of regional stakeholders including Afghanistan, China, Iran, Pakistan, Russia and Turkey, with a focus on Parliamentary cooperation for peace, connectivity and prosperity in the region.

The Iranian top legislator said that all should be grateful to Trump for making the picture transparent to let each side know what to do. “The Americans have been the same as what they show today since a time ago but they used to frame the issues differently with playing with words,” noted Mr. Larijani.

He underlined that Americans have been unsuccessful in Afghanistan, Iraq, and other countries. “But currently they are trying to put the blame on someone else and they would keep on this path,” he said.

“The Pakistani president reiterated that cooperation on gas and oil and that is an important point,” stated the Iranian law-maker calling for activation of potentials in Iran-Pakistan relations.

“Cooperation would enable the countries of the region and that is why we have laid pipes to our borders with Pakistan and the rest of the job is up to you,” said the Iranian official.

Saying that still problems exist in bank transferring and transactions between Iran and Pakistan, Mr. Larijani voiced hope for removal of barriers in the path to expand relations.

The Pakistani top senator also condemned Trump’s policies and said that US president has been trying to frame Pakistan responsible for the spread of terrorism in Afghanistan.

“This is while Pakistan has lost 70,000 of security forces, women, and children in the path of fighting terrorism and many have been wounded,” said Mr. Rabbani.

“The people of Pakistan are tolerant and will stand up till the final victory,” said the chairman of Pakistani senate after regretting that his country has suffered huge economic costs for the current situation.