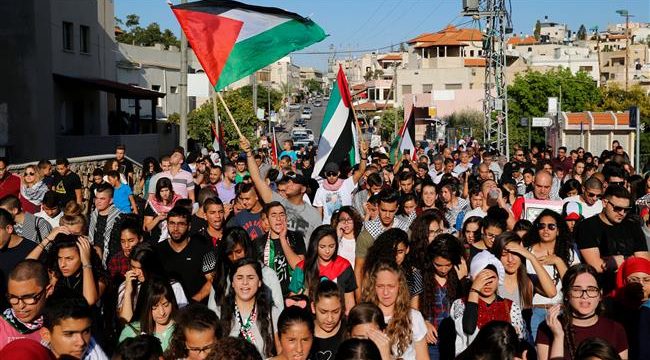 Is new intifada forming in Palestine?

Alwaght– The American President Donald Trump’s decision to recognize al-Quds (Jerusalem) as the capital of the Israeli regime has so far provoked massive reactions from many Muslim and even non-Muslim countries.

Different analysts vary in their ideas on the issue. Meanwhile, one issue has picked big attention: Will Trump decision spark a new Palestinian intifada in the occupied territories?

The answer to this question takes a flashback to the record of Palestinian intifadas in the past.

Palestine’s intifada can be divided into three periods:

The first period started from 1978 and lasted to 1993. The anti-Israeli activism took place after an Israeli driver ran over a number of Palestinian workers. Short after the incident, the Palestinians sank the occupied territories into massive anti-occupation protests. The first intifada lasted six years before it was put down by the Oslo Accords which were signed in 1993 between Yasser Arafat of the Palestinian Liberation Organization and the Israeli Prime Minister Yitzhak Rabin with an American mediation. During the first intifada, Israeli regime killed at least 1,200 Palestinians, and injured thousands more.

The second intifada erupted in 2000 and lasted to 2005. Known as al-Aqsa intifada, the second uprising come after Ariel Sharon, the contemporaneous Israeli president, visited the holy al-Aqsa Mosque. The tour to the holy Muslim place provoked fury among the Palestinians and heavy clashes ensued. Not long after the incident, the rallies spread across the Palestinian territories. The Israeli security forces killed 4,000 Palestinians in the second protest wave.

All three intifadas in Palestine have common traits, including:

The popular protests are the key feature.

The youths account for the major body of intifada protestors.

Eruption of the intifadas are a result of direct and indirect provocative Israeli actions, like Sharon visit or ongoing Israeli occupation.

The intifadas have been subject to changes over time. In the first one, the weapons were simple, mainly restricted to stones thrown at the Israeli forces. In the second intifada, there was an upgrade, with the stones giving their place to Molotov cocktails, as well as short-range rockets fired from Gaza into the Israeli settlements by Hamas resistant movement. The current uprising is witnessing the use of a set of tools ranging from knives, car ramming, and in rare cases assault weapons.

Is a rejuvenated intifada possible after Trump decision?

To answer this question, the status of al-Quds in terms of politics and identity should be brought into the spotlight.

From an identity aspect, al-Quds was Muslims’ first Qibla, the direction that should be faced when a Muslim prays during salah prayers. This Qiblah was used for over 13 years, from 610 CE until 623 CE. Afterwards  the Qibla became oriented towards the Kaaba in Mecca.

The city is the third holiest Muslim place after Mecca and Medina, with the Muslims still accounting for the majority of its population. Changing the status of the city by declaring it a capital for a Jewish state will pose a big identity challenge to the Muslim world. So, in terms of identity, al-Quds seizure bears the potentials to ignite a new intifada.

Politically, Trump and the far-right Israelis insist on the seizure of the whole city. If this is accepted by the Palestinians, it means that al-Quds will cease to be a contested city. And any independent state of Palestine will have Ramallah as its capital. This, in turn, will mean that the two-state solution will be dropped. Trump’s announcement is, in fact, the second Balfour declaration that recognizes al-Quds as the Israeli capital and will open the door for the city’s Judaization. This is not acceptable to the Palestinians especially that the global law enforcement organizations and the UN are unanimously rising in solidarity with Palestine.

Failure of the peace talks is the most significant consequence of al-Quds occupation. The Palestinian compromisers have well understood through the past negotiations with the Israeli regime that Tel Aviv never seeks a peace deal or it is not poised to make concessions to the Palestinian side. This understanding automatically pushes the Palestinians to the resistance and intifada choice.

On the other side, the American embassy relocation and the Judaization of al-Quds will thwart efforts by some Arab regimes such as Saudi Arabia and Bahrain for publicizing their relations with Tel Aviv. This means that the conservative Arab countries will have to continue diplomatic normalization process with the Israeli regime on the sly.

The new developments have restored the Palestinian occupation as the top Muslim world cause. The sensitivity to the Palestinian cause is returning to its previous strength.

But why the intifada has not been tangibly successful so far?

The Palestinian intifada lacks a specific scenario and necessary prerequisites. This is why it has not been so successful so far. The anti-occupation Palestinian uprising to win needs some backgrounds. Here are some of them:

First one is the unity of the Palestinians in their goals and procedures. The second one is a unifying and mobilizing leadership. And the third prerequisite is adequate financial and logistic resources. Weapons are crucial to the new intifada. An unarmed intifada does not deliver strong promises of success.

Foreign support is also decisively vital to the Palestinian intifada. Such backing should be all-out and free from the conservatism. The Palestinians cannot count on help from countries which hold warm relations with Washington and Tel Aviv and are diplomatically on good terms with them. Backing provided by some states to the Palestinians, especially in the current case of al-Quds, is apparently tactical and thus transient.

And culturally, the Palestinian people should strongly believe in massive potentials of anti-Israeli resistance. Their enemy is doing its best to undermine their efficient resistance doctrine. Resistance is the only viable choice for the Palestinians to counter an adversary which proved to only understand the language of force.