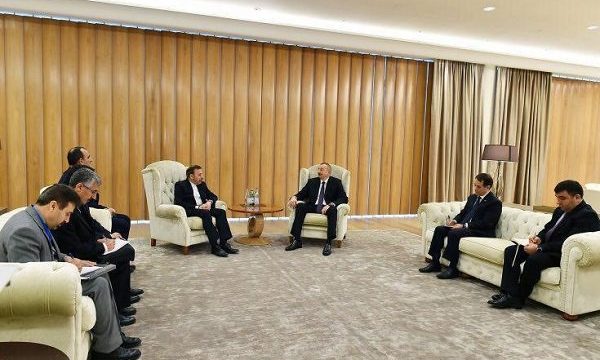 MNA- On the sidelines of Islamic Solidarity Conference in Baku, the head of the Iran’s president office met and talked with Azeri president Ilham Aliyev and the two sides stressed the necessity of accelerating their economic and financial projects.

In the meeting on Thursday, Head of President’s Office Mahmoud Vaezi, stressed the importance of the tripartite economic cooperation of Iran, Turkey and Azerbaijan, and their decision to let private sector play a part in enhancing cooperation among them.

Vaezi emphasized the need to strengthen Iran-Azerbaijan banking relations and develop oil cooperation in the Caspian Sea, as well as to accelerate joint projects, including the joint railway network.

He expressed the hope that they use their national currencies in their financial transactions, and noted, “along with developing Economic and trade cooperation, we must try to enhance cultural, political and social relations as well.”

Azerbaijani president Ilham Aliyev, for his part, appreciated the active participation of Iranian delegation in the Islamic Solidarity Conference in Baku, saying “today, the Islamic Republic of Azerbaijan and Islamic Republic of Iran have common positions in many regional and international issues, and are working to strengthen Islamic unity and solidarity.”

President of the Republic of Azerbaijan stated “in the current situation, it is necessary for the Islamic countries like Iran and Azerbaijan to further increase their relations and develop their bilateral and multilateral cooperation.”

Aliyev pointed to the necessity for accelerating the projects between the two countries, including the projects of building a car as well as a medicine factory by Iran in Azerbaijan, and emphasized that the joint railway network and the North-South Corridor should also accelerate.

Azerbaijani president also said the two sides should use their own national currencies in their commercial and financial relations and pointed out that the necessary instructions have been issued in Azerbaijan in that regard.

A the end of his remarks, President of the Republic of Azerbaijan hailed Iran’s role in security in the region and emphasized the necessity of developing information, security and defense cooperation between Tehran and Baku.

Ilham Aliyev, Iran-Azerbaijan ties, Mahmoud Vaezi December 22, 2017
Iran willing to normalize ties with KRG, but not without change
Iran rules out nuclear talks with US