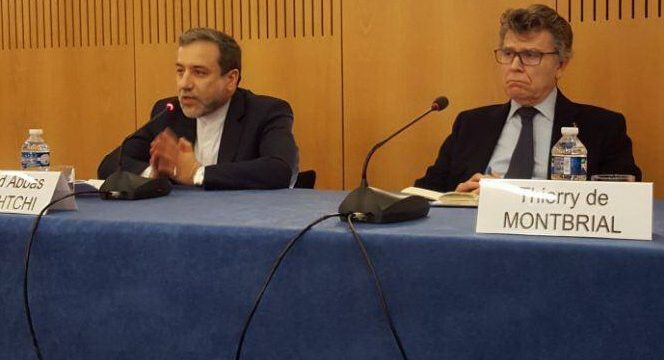 Araqchi made the remarks during his visit to Paris on Thursday and his meeting with President of French Institute of International Affairs Thierry de Montbrial.

The Iranian deputy foreign minister, meantime, delivered a speech for researchers of the institute on Joint Comprehensive Plan of Action, bilateral ties between Iran and France as well as regional and international issues.

Araqchi pointed to nuclear deal as an important diplomatic achievement in the field of settling international problems and underlined that the JCPOA is merely limited to nuclear issue and has no connection with any other issues.

He also explained Iran’s stances and policies on regional developments, including Lebanon, Syria, Yemen, Iraq , Bahrain as well as terrorist group of Daesh, and said that Iran considers its peace and stability in the region as its own one and will spare no efforts to fulfill that.

He pointed to holding political talks with French officials within the framework of fourth round of political talks in Paris, and said they were useful and constructive and in direction of providing mutual interests.

Araqchi pointed to importance of economic cooperation between Tehran and Paris and underlined the efforts in the direction to facilitate necessary grounds for such cooperation as exigencies of current bilateral relations.

During his 2-day visit to France, Araqchi met with different French officials and left Paris on Thursday evening.