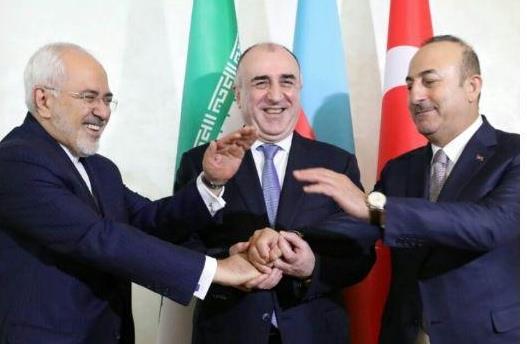 Zarif who is currently in Baku to attend the trio’s foreign ministerial meeting told reporters while visiting reconstructed building of Iran’s embassy in Baku that this is the fifth meeting of the three countries’ foreign ministers, with the third and fourth meetings held in Turkey and Iran, respectively.

Holding the meetings is a very good initiative, as there are numerous areas for cooperation among the trio in banking industrial and trade arenas, he said.

Elaborating on the topics for discussion by the foreign ministers of Iran, Azerbaijan and Turkey on Wednesday, he said that political consultations, economic, banking and trade cooperation are on the trilateral meeting’s agenda.

“I seized the opportunity to discuss latest development in bilateral relations with President Ilham Aliyev,” he said, describing the meeting as good.

Noting that this is his second visit to the country during the recent month, he added that in the same period, presidents of the two countries met in Istanbul on the sidelines of Organization of Islamic Cooperation (OIC) Conference.

The two countries’ presidents have met ten times since the time President Hassan Rouhani came to power in 2013, he said, arguing that the issue is indicative of unprecedented boost in relations between Iran and neighboring, brotherly Azerbaijan Republic.

The Fifth Trilateral Meeting of the three countries’ foreign ministers will be held on Wednesday with Zarif, his Azeri and Turkish counterparts Elmar Mammadyarov and Mevlut cavusoglu, respectively in attendance.

The meeting will discuss a wide range of issues and cooperation in areas of mutual concern, including economy, transit, transportation, energy, customs as well as avenues for further promoting peace and stability in the region.