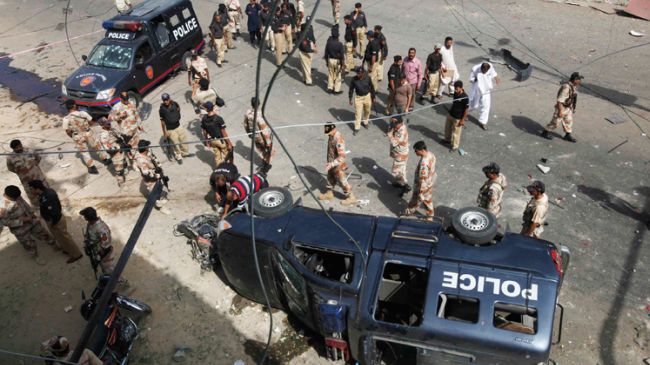 Press TV- A militant attack on a church in the southwestern Pakistani city of Quetta has left seven people dead and more than a dozen others wounded.

All casualties were shifted to Civil Hospital in Quetta, where medics said they had initially received four bodies and around 20 injured, including women and children.

Three of the injured passed away while undergoing treatment for their injuries, according to local sources.

Sarfaraz Bugti, the home minister for Baluchistan Province, where Quetta is located, said the attack had been launched by four individuals, but the police chief spoke of only two in his briefing.

One attacker was killed at the entrance to the church while the other set off his explosive payload inside the building, where hundreds of worshippers were attending services at the church ahead of Christmas, Bugti said.

Security guards at the church exchanged fire with the attackers before they could enter the main perimeter, said provincial police chief Moazzam Jah.

Jah said the church had guards because Christian places of worship are often targeted by militant extremist groups.

There has been no immediate claim of responsibility for the attack.

Extremist militants have on numerous occasions in the past targeted Pakistani minorities, including Shia Muslims and Christians.

Critics blame the Pakistani government for its unwillingness to take decisive measures to protect minority communities threatened by extremist groups.

International organizations and rights groups have been pressuring Islamabad to take strong action against militant groups behind the violence in the country.