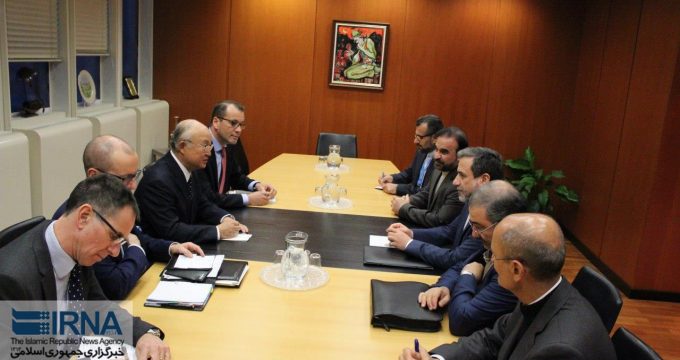 IRNA – Deputy Foreign Minister of Iran Abbas Araqchi and Director General of the International Atomic Energy Agency (IAEA) Yukiya Amano on Wednesday discussed cooperation between Iran and the nuclear watchdog as well as implementation of the 2015 nuclear deal.

Druing the meeting, Araqchi stressed the need for continuation of professional work and impartiality by the IAEA during verification of Iran’s commitments under the deal, officially known as the Joint Comprehensive Plan of Action (JCPOA).

The UN nuclear watchdog has so far confirmed Iran’s full implementation of its obligations for nine times. On November 13, the agency released its 9th quarterly report on Iran, confirming its adherence to all conditions stipulated in the nuclear deal including the rate of heavy water reserves, level of enrichment and stocks of enriched uranium.

Araqchi’s visit with Amano took place on the sidelines of a joint commission on the JCPOA implementation in Vienna.

According to Araqchi, the Iran-IAEA cooperation was also raised during the commission’s meeting and all participating countries appreciated Tehran for its full collaboration with the agency. They also expressed pleasure over IAEA’s verification of Iran’s nuclear program for the ninth time.

Araqchi further recalled that the issue of modernizing Arak reactor was seriously discussed during the meeting.

‘Today’s meeting also dealt with Arak reactor designs, equipment and safety of the reactor, supplying fuel for the reactor and specifications of the fuel to be produced in Iran,’ he said.

Other topics mentioned in the meeting included scheme of the stable isotopes conducted in cooperation with Russians and the peaceful cooperation projects undertaken with most of the member states of the joint commission and the European Union, Araqchi added.

The meeting of the Joint Commission on JCPOA which was co-chaired by Araqchi and secretary-general of the European Union’s foreign policy service Helga Schmidt was held with the representatives of the 5+1 Group in Vienna on Wednesday at the level of political directors.