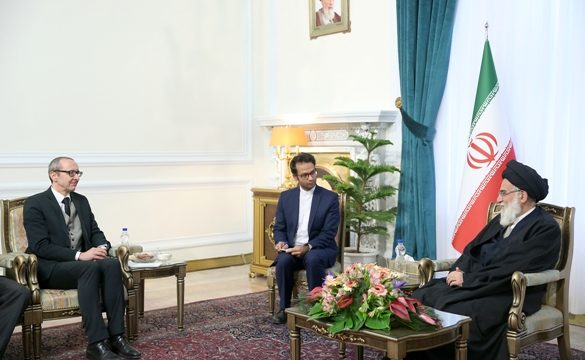 EC Chairman: Iran still committed to JCPOA despite US disloyalties

IRNA – Chairman of the Expediency Council Ayatollah Seyyed Mahmoud Hashemi Shahroudi said that Iran is still committed to the Joint Comprehensive Plan of Action despite repeated violation of the JCPOA by the US.

‘Iran’s policy is based on acting in accordance with ethics and commitments as is witnesse from its continued commitment despite repeated breaches of the commitment to the JCPOA by the other party,’ noted Shahroudi in a meeting with Austrian Ambassador to Tehran Stefen Schultz.

Referring to long record of Iran-Austria relations, Shahroudi said, ‘We hope that during your tenure in Tehran, good and historical relations between the two countries would expand in various dimensions, especially in the scientific and intellectual domains as well as in areas related to the rights of human beings and nations.’

Describing Austria’s stances on international issues as ‘rational and meticulous’, he said, ‘We expect the two countries will use their relations to solve current world problems and regional problems like terrorist groups’ moves because today, terror and terrorism have created many problems worldwide.’

He referred to Austria’s relations with Muslim countries and presence of large groups of Muslims in the European country as a suitable opportunity for the expansion of relations.

Ayatollah Shahroudi said, ‘We can use the opportunity to introduce genuine Islam instead of wrong and diversionary rendition; by doing so we can prevent the blows on the essence of Islam and its injunctions.’

The Ayatollah referred to influence of the Islamic Republic of Iran in regional countries and among the world Muslims, and said, ‘The world arrogance and certain regional states are trying to offer a distorted and diversionary image of the genuine Islam to prepare the grounds for Islamphobia in Europe and other countries; however, the fact is crystal clear to the European people and Muslims that reason and observation of rights and ethics have special status in methodology of the Islamic Republic of Iran and genuine Islam is a rational Islam not the Islam of Daesh and Takfiri terrorists.’

He went on to announce, ‘Today experience has proved that wherever the Islamic Republic of Iran has stepped in, protection of the rights of human beings and of minorities have been the priority for us. This is while our enemies in the region follow Iranphobia policies and even level terrorism charges to the groups and people like Palestinian strugglers and Lebanese Hizbollah who seek their due rights.’

The Expediency Council Chairman said Lebanese Hizbollah seeks restoration of security and calm inside Lebanon but hostile publicity on part of certain countries against the group and the Islamic Republic of Iran are not true and we hope enemy’s deceitful propaganda will not affect Iran relations with other countries.

He emphasized that the Islamic Republic of Iran has always been supporting nations and official and national governments of countries. ‘We are ready to help any country seeking our help to solve their problems.’

‘As we assisted in Iraq to establish their nation government and restore tranquility, in Lebanon we seek peace and we are also ready again in that connection in Yemen to ensure restoration of tranquility. Of course, certain regional countries, supported by the US, are in efforts to stir security and calm of the region.’

He then referred to the US breach of the JCPOA commitments and said, ‘In connection with the JCPOA, the Islamic Republic of Iran showed that it is loyal to its commitments, but taking the other party into account, breaches of commitment was observed in certain cases, like monetary and banking issues.’

Elsewhere in his remarks, he said cultural, legal, academic and scientific relations serve as a suitable ground for expansion of relations between the two countries. ‘Austria can have active cooperation with Iran in various fields like investment and banking exchanges.’

In light of scientific and cultural cooperation, durable relations can be formed in contrast to the terrorist and destructive ideology which has created ample problems worldwide, said the Iranian official.

Also referring to the recent move of the US president to transfer the embassy of the country to noble Quds, Ayatollah Shahroudi said, ‘Today, we are witnessing that all countries have voiced opposition and protested the irrational and illogical move of the US President and it has been proved to all that the US seeks to follow Zionists despite the unwise and tyrannical moves.’

‘Thanks God Almighty, all countries have somehow condemned the move and they are expected not to fear the US, while when it comes to acting on the JCPOA and when world community liabilities to Iran are considered, not to follow the US so that relations of countries and nations will expand in light of common benefits.’

Schultz, for his part, thanked Iran for providing the opportunity for the meeting and while referring to 500-year-old background of relations between Iranian and Austrian nations, and said, ‘Throughout history Austria has been siding with the Iranian nation and we hope to have more cooperation in various fields than the past. To this end, Austrian companies are willing to have more active presence in Iranian industry and trade.’