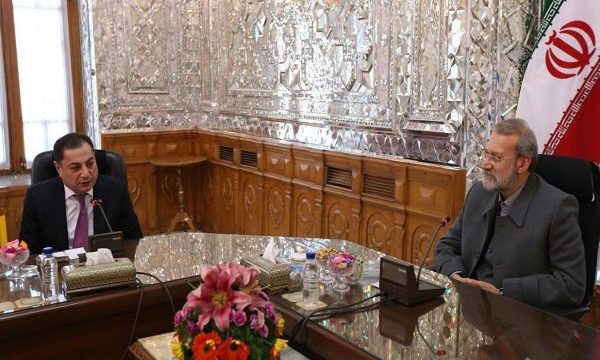 “Iran will spare no efforts to resolve the Karabakh crisis and we hope the issue be resolved very soon with peace and friendship,” said Ali Larijani, the Speaker of Iranian Parliament on Monday.

The top law-maker made the remarks during his meeting with Vahram Baghdasaryan, an MP from the National Assembly of the Republic of Armenia, also referred to as the Parliament of Armenia, who also heads the Parliamentary Friendship Group of Armenia-Iran.

“We believe that peace and dialogue are the best ways out of political conflicts, because currently the region is fed up with conflict and rift and more call for war is not in the interests of any country,” underlined the Iranian top legislator.

“When Iran makes friends with a country, it will stand up to its friendship till the end and Iran is not like some countries who suddenly turn their positions 180 degress, and it proved this quality in the case of Iraq and Syria which were hit by terrorists,” affirmed Mr. Larijani.

Mr. Baghdasaryan, for his part, said that political and economic relations with Iran are the top objectives of Armenia’s foreign policy agenda.

“Good political ties with Tehran is the objective of our foreign policy and we do our best to enhance bilateral ties to their utmost capacity,” asserted the Armenian legislator after describing Iran as one very good neighbors of Armenia.

“In all these years, the Islamic Republic of Iran has tried hard to keep a balanced and symmetrical policy toward the regional issues and the Karabakh crisis,” said the Arminian MP hailing the role of Iran in stabilizing the region.