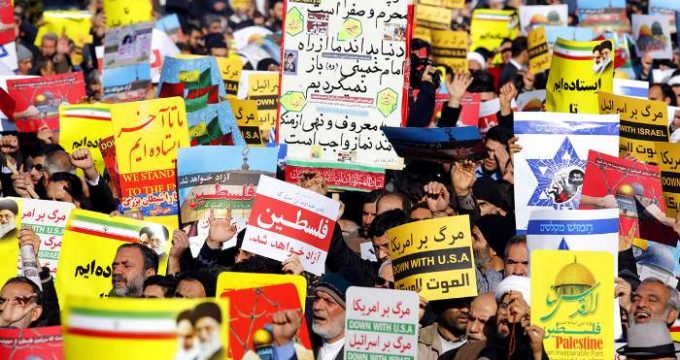 Chief of Staff of Iran’s Armed Forces Major General Mohammad Hossein Baqeri warned that certain foreign countries are plotting to widen the gap and increase differences in the region.

Ministerial meeting on Caspian Sea kicks off in Moscow

A meeting of the five Caspian Sea littoral states at ministerial level began in Russia on Tuesday to continue their discussions on legal status of the Sea.

EU calls on US to stick to Iran nuclear deal

The Latest on U.S. Secretary of State Rex Tillerson’s trip to Europe (all times local):

Palestine will be free, it’s out of despair they want to declare Jerusalem capital of Israel

On the auspicious occasion of the birth anniversary of Prophet Muhammad (saw), the heads of government branches, a group of government officials, ambassadors of Islamic countries and participants in the 31st International Conference on Islamic Unity met with the Leader of the Revolution, Ayatollah Khamenei, this morning December 6, 2017.

Iranian foreign ministry has strongly denounced the US administration for its decision to relocate its embassy from Tel Aviv to Jerusalem and recognize Jerusalem al-Quds as the capital of the occupying regime of Israel.

Iran sees no political obstacles for new supplies of Russian weapons, Chairman of the Committee for Foreign Policy and National Security of Iran’s Islamic Consultative Assembly Alaeddin Boroujerdi told TASS. At the same time, he added that the military was to make decisions on that matter.

Chief of Staff of the Armed Forces Major General Mohammad Baqeri in a statement issued on Thursday condemned US President Donald Trump’s decision in recognition of al-Quds as capital of the Zionist regime.

Hundreds of Thousands Iranians from every walk of life poured into the streets in cities across the country on Friday to voice their protest against US President Donald Trump’s planned move to relocate the US embassy from Tel Aviv to al-Quds (Jerusalem).

British Foreign Secretary Boris Johnson in a visit to Tehran reaffirmed his country’s commitment to the full implementation of the Joint Comprehensive Plan of Action (JCPOA), a nuclear agreement between Iran and six world powers.

The chief commander of Iran’s Islamic Revolution Guards Corps (IRGC) says Jerusalem al-Quds will turn into a graveyard for the Israeli regime.

President Hassan Rouhani arrived in Majlis’ (parliament) main chamber on Sunday to submit his proposed budget bill for the next Iranian calendar year (beginning on March 21, 2018).

In the absence of Iran’s anti-Daesh measures, terrorists had taken control of Iraq and Syria and would have now been Europe’s neighbor, an Iranian security authority said.

Iran and Hungary have signed an agreement to jointly produce 1,000 buses in the Islamic Republic.

Turkish banker’s lawyer blames laundering on others at Halkbank

Lawyers for a Turkish banker accused of aiding an Iran sanctions-evasion plot are pointing the finger at his colleagues.

Iran’s LPG export program has extended its decline for a fourth month in December, even though the South Pars gas field resumed production around three weeks ago after two months’ maintenance, trade sources said this week.

Iraq has agreed to swap up to 60,000 barrels per day of crude produced from the northern Iraqi Kirkuk oilfield for Iranian oil, Iraqi Oil Minister Jabar al-Luaibi said on Saturday.

US President Donald Trump has officially declared the disputed city of Jerusalem al-Quds as Israel’s capital, despite warnings from around the world that the measure risks triggering a fresh wave of violence in the Middle East.

The secretary general of the Lebanese Hezbollah resistance movement says US President Donald Trump’s recognition of Jerusalem al-Quds as Israel’s capital is an insult to all Muslims and a violation of international law.

A senior Iranian diplomat says a decision by US President Donald Trump to recognize Jerusalem al-Quds as Israel’s “capital” is aimed at legitimizing the Israeli regime’s occupation of Palestine.

Palestine to ask the UN to issue a resolution on Trump’s al-Quds decision: Palestinian FM

Arab foreign ministers late on Saturday urged the United States to abandon its decision to recognise Jerusalem as Israel’s capital, saying the move would increase violence throughout the region.

Iran’s recent decision to once again block Waze, a mobile navigation app developed in Israel, has created a great deal of controversy in the country. The GPS-based software had become popular both among the public as well as Iran’s leading ride-hailing apps, Snapp and Tap30.

Two Iranians have made $800,000 gift to Stanford University to launch ‘Maryam Mirzakhani’ graduate fellowship program to support graduate students of Mathematics at Stanford.