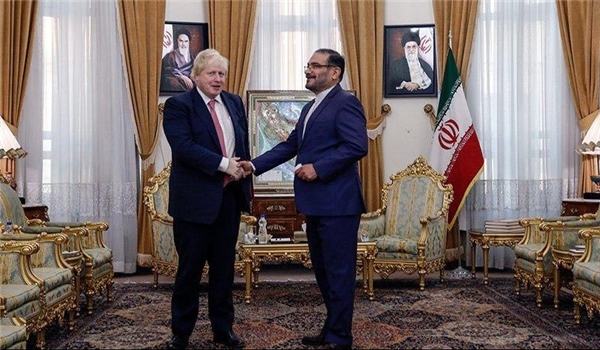 IRNA – In the absence of Iran’s anti-Daesh measures, terrorists had taken control of Iraq and Syria and would have now been Europe’s neighbor, an Iranian security authority said.

“The post-JCPOA economic cooperation between Iran and the UK is not satisfactory at the moment,’ Secretary of Iran’s Supreme National Security Council Ali Shamkhani said Saturday in a meeting with British Foreign Secretary Boris Johnson.

“Facilitating banking ties can be a prelude to developing cooperation,’ he added.

“The US behavior towards Iran nuclear deal is a disaster and staying on it will discredit the US and also the international accords,” he said while criticizing European countries and the US for not implementing Joint Comprehensive Plan of Action (JCPOA).

“Iran has made necessary decisions as regard Washington’s improper behavior toward Iran deal,” he noted.

Elsewhere in his remarks, Shamkhani pointed to President Trump’s recent decision to relocate US mission from Tel Aviv to Beit-ul-Moqaddas as an unwanted service to the Islamic World.

“Palestine is a united country and the US decision will make Islamic World focus more on Palestine issue and will make Muslims more unified to confront “child-killer” Zionist Regime,” he said.

He also slammed the UK government approach in selling weaponry and security equipment to human rights violators like Saudi Arabia and Bahrain.

While all international bodies have condemned siege and bombardment of Yemeni people, their accomplices will also be accused in public opinion.

Meanwhile, Johnson referred to the importance of making efforts to remove barriers on the way of Iran nuclear deal, saying JCPOA is a multilateral and international agreement and its implementation will be to the benefit of world peace and stability.

Unilateral acts will make difficult achieving peace, he said, stressing on London’s opposition to US decision in recognizing Holy Quds as Israel’s capital.

“The UK has made no choice to relocate its embassy to al-Quds,” he noted.