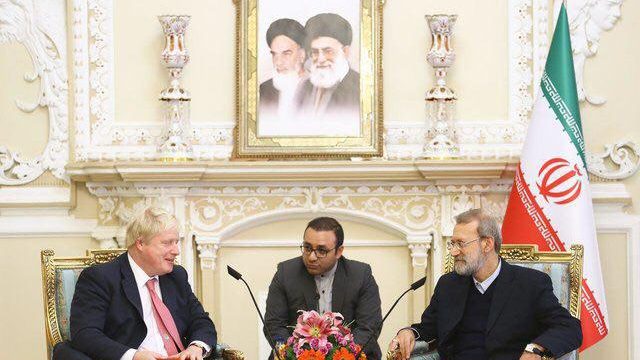 IRNA – British Foreign Secretary Boris Johnson said on Saturday that London will support the 2015 nuclear deal as an important and international agreement.

Britain likes to see the Iranians benefit from the nuclear deal’s, officially known as the Joint Comprehensive Plan of Action (JCPOA), economic aspects in addition to its nuclear part, Johnson said in a meeting in Tehran with Iran’s Majlis (Parliament) Speaker Ali Larijani.

Noting that it is his first visit to Iran, Johnson expressed condolences of the British people to the Iranian nation over the recent fatal earthquake in western Iran.

Johnson added that his visit aimed at promoting the level of Tehran-London cooperation in different political, economic and parliamentary fields as well as removing hurdles in the way of further mutual ties.

The British minister also urged exchange of further delegations between the two countries and stressed that Britain is willing to have more tourists from Iran.

Though we had made some mistakes in the past regarding the dissolution of regimes in the region but we were to establish stability in the region and presently we believe that peace and security should be resorted to the region, he said.

Referring to current relations between Iran and Saudi Arabia, Johnson pointed out that tension between the two sides will benefit no country and it will only create instability in the region.

The British foreign secretary stressed that London was willing to make Tehran’s efforts in line with establishing stability be heard by other countries.

Deploring over presence of terrorist groups in the region, he said that both Iran’s Majlis and the United Kingdom’s House of Commons came under terror attacks.

Johnson said that his respective country is interested to work together with Iran in the fight against terror and will surely use Iran’s experience to this end.

Meanwhile, Larijani, for his part, complained that Britain did not take serious steps for economic cooperation after the approval of the JCPOA, while other European states have made further efforts in this regard.

He added that London has even failed to solve Iran Embassy’s banking problems in London.

Appreciating Johnson and his accompanying delegation’s sympathy over the recent devastating quake which killed over 500 people and injured thousands more, Larijani said that Tehran too is keen on promoting ties with EU.

Although Iran-Britain ties have a long history, they always faced ups and downs, Larijani said.

He stressed that Tehran is against any deployment of military forces to other countries.
He recalled that since 2000 when the US and British armies attacked Afghanistan and afterwards to Iran, the region is suffering from chaos which is aggravating day in day out.

The attacks contributed greatly to the spread of terrorism, he said, noting that instead of Iranophobia, realities should be taken into account.

Elsewhere in his remarks, Majlis speaker said that Bahraini people want nothing but democracy, they demand a fair voting right. “Why do you support repressing them?” Larijani asked the British minister.

“You say you are human rights advocate but you are backing those violating Bahraini people’s rights,” Larijani said.

“That’s always the case in Yemen. Why they are not allowed to decide for themselves? You supply arms and equipment to those bombing the Yemeni people,” Larijani added referring to various regional crises.

“We are serious in the fight against terrorism in Iraq and Syria and we have entered war against terrorism at their own official invitation,” he said, maintaining, “We see dialogue as the only solution to regional problems.”

Larijani also condemned US President Donald Trump’s decision to recognize the Holy Quds as the capital of the Zionist regime of Israel as well as relocating the US Embassy to Beit ul-Muqaddas from Tel Aviv noting, “That is one of the very big mistakes of the US administration.”