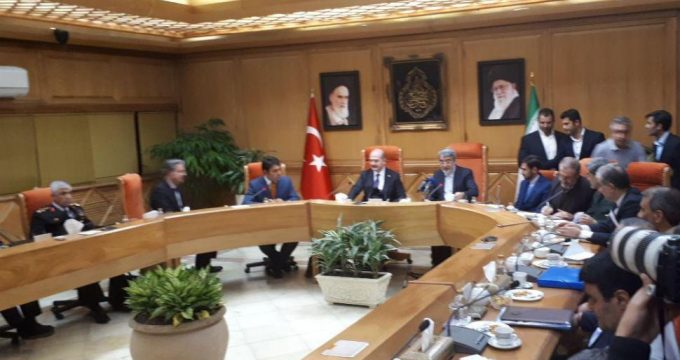 IRNA – Interior Minister Abdolreza Rahmani Fazli said Iran and Turkey considering their good cooperation in the fields of security are due to hold a joint security commission meeting in Turkey to draw a road map in this concern.

He made the remarks in a joint press conference with his Turk counterpart Suleyman Soylu here on Saturday evening.

Rahmani Fazli said that in his meeting with Suleyman Soylu the two sides discussed cases such as terrorism, border, goods smuggling, drugs and human trafficking.

He said it is due that next joint security commission to be held in Turkey and a road map to be drawn in these fields so that they could be executed.

The Iranian minister said that cooperation between the two countries could be a base for strengthening politico-economic, trade and security relations and to be a basis for peace and security in the region.

He said enemies of Islam are engaged in seduction and stressed that as Iran cooperated with Islamic states like Turkey to defeat Daesh in Syria and Iraq, continuation of such cooperation may lead to neutralizing other conspiracies.

Suleyman Soylu said that sitting at a table could be a milestone for tranquility and security in the region and cooperation in different fields of security has a great deal of importance.