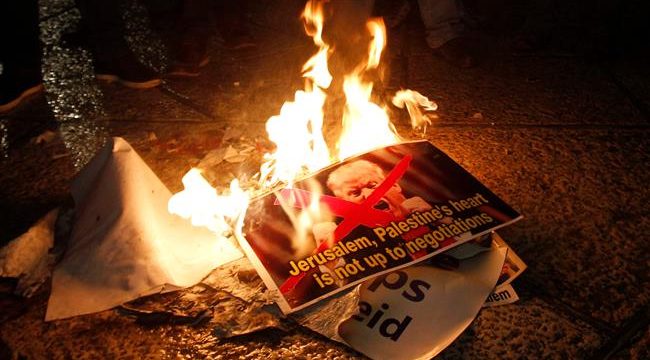 Thousands of Muslims in Asia protest against Trump’s Jerusalem plan

Reuters – Several thousand protesters in Muslim-majority Indonesia and Malaysia rallied on Friday to condemn the U.S. decision to recognise Jerusalem as Israel’s capital, as authorities tightened security outside U.S. embassies.

Leaders in both Southeast Asian countries have joined a global chorus of condemnation of President Donald Trump’s decision.

Protesters, some shouting anti-U.S. slogans and burning an effigy of Trump, gathered in front of the American embassy in the Malaysian capital of Kuala Lumpur.

In Indonesia, a few hundred demonstrators mostly clad in white rallied outside the U.S. embassy in Jakarta, capital of the world’s biggest Muslim-majority country.

Some wore checkered scarves and waved Palestinian flags, while others shouted “Allahu Akbar” (God is greatest).

”We’re standing here in the name of justice and humanity. We’ve gathered to defend our Palestinian brothers and sisters,” said one rally leader in Jakarta.

Water cannons were on standby at the site, but the rally was peaceful and the number of demonstrators appeared far lower than the 500 to 1,000 police had anticipated.

One protester, Yuddy Kurniawan, 30, said he was not satisfied with his government’s response to the U.S. decision.

“Jokowi can be tougher and call for a boycott of American products for instance,” said Kurniawan, referring Indonesian President Joko Widodo by his nickname.

The U.S. embassy in Jakarta advised its citizens to avoid demonstrations and said its consulate in Indonesia’s second-biggest city of Surabaya had suspended public services on Friday.

A small group of students rallied in the city of Makassar on Indonesia’s Sulawesi island and set fire to U.S. and Israeli flags, media reported.

Indonesia has been a long-running supporter of the two-state solution in the Israeli-Palestinian conflict and there have been demonstrations in support of the Palestinians in recent years.

Widodo on Thursday urged the United States to reconsider its decision and instructed his foreign minister to summon the U.S. ambassador for an explanation.

“Mr President, this is an illegal announcement. Jerusalem is an occupied territory,” Minister for Youth and Sports Khairy Jamaluddin said through a loud hailer towards the embassy.

Trump said on Wednesday the United States would move its embassy to Jerusalem in the coming years.

Protests have erupted in the West Bank and the Gaza strip as the Islamist group Hamas urged Palestinians to launch a fresh uprising against Israel.

The status of Jerusalem is one of the thorniest barriers to a lasting Israeli-Palestinian peace. Its eastern sector was captured by Israel in a 1967 war and annexed in a move not recognised internationally. Palestinians claim East Jerusalem for the capital of an independent state they seek.