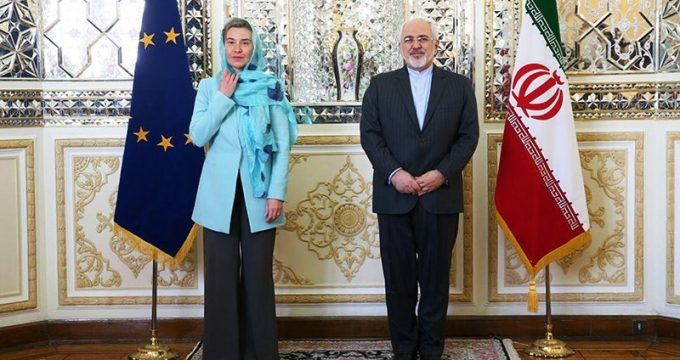 The EU views the nuclear deal from various perspectives. These include the economic benefits of the implementation, impact of the deal on political balance inside Iran, realization of diplomatic potentials, the intermediary and coordinating role of Europe in a complicated issue in need of international supervision, the deal in relation with the concept of global community, the paradigm of multilateralism. Last but not least are Europe’s role in regulating the international system’s agenda and avoidance of the White House’s ideological approaches. Above all these remarkable angles is the deal’s geopolitical outlook that has played a prominent role in constructing EU’s move during the nuclear talks and after the nuclear agreement.

Perhaps one of the most significant aspects of the nuclear deal for the EU lies in its increased sensitivity about factors, processes, and actors that work for and against security in the Middle East. In recent years, the EU has face two remarkable threats, i.e. threats against the lives of European citizens caused by terrorist attacks rooted in ME conflicts and threats against the Europe project. Thus, the EU is contemplating files such as the military occupation of Iraq in the first years of the third millennium, which led to a period of violence and instability with Muslim youth radicalized all around the world and ultimately breakout of civil wars in the region sending floods of migrants and terrorist attacks toward Europe. The developments threatened Europe’s social security and identity, widened the social rift in the Continent, and deepened the influences of the populist Right, ultimately threatening the Europe project itself. A considerable number of European analysts believe that the success of the Brexit campaign came mainly because of Europe’s encounter with the security, political, social, and economic consequences of the inflow of asylum-seekers from crisis-hit regions of the Middle East, making the ideas of anti-EU parties more acceptable for the public.

It seems that the EU views the new US administration’s anti-deal moves as one of the desecuritization processes in the Middle East. Abroad but still close for Europeans, Middle East is a region whose every geopolitical development has a direct bearing on the security and stability of the Continent. From Europe’s point of view, the first step toward the stabilization of the ME, particularly after the Arab Spring developments, is the nuclear deal with Iran. The EU is aware of the geopolitical and geostrategic capabilities of Iran and concerned about the security consequences of the country’s potential response to US President Trump’s anti-JCPOA policies in the crisis-hit region. In fact, to Europe, the collapse of the deal would render diplomatic means for the management of tensions between Iran and the US inefficient, thus making it possible for a war to break out or for the non-proliferation regime to break apart in the Middle East. From this point of view, the ramifications of Iran-US ties turning unmanageable will spread to Europe, just as those of the Iraq war did. In other words, the nuclear deal is not only about Iran’s futures but also more or less about the futures of the Europe project.

Nonetheless, the impact of geopolitical and security considerations of the region on Europe’s geo-economic and trade ones should be seen as uncertainties or else propellers of Europe’s policies on the nuclear deal. In Europe’s view, Iran is an influential geopolitical power for the handling of the ME crises, that have gone too far, even threatening the Europe project. In the short- and mid-run, Europe’s account of Iran, as a desecuritization or securitization actor in the region, would have an undeniable bearing on its decision on and about the nuclear deal. A hypothesis can be that Iran has the geopolitical and geostrategic power needed for securitization and taking the deal as hostage. Accordingly, Iran could play a securitizing actor in the region, with fundamental attention to public and media diplomacy in its necessary missiles operations, and sell security to Europe in return for fulfilled benefits of the deal, within the Continent’s capacity.