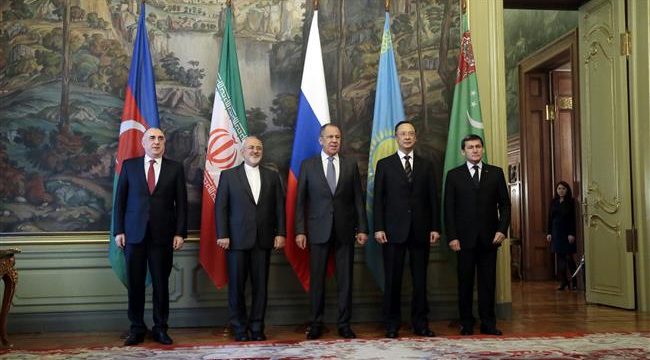 Tasnim– Iranian Foreign Minister Mohammad Javad Zarif said the Caspian Sea littoral countries have reached a consensus on the bulk of the sea’s long-awaited legal regime and have agreed to ban all foreign military forces from entering the sea.

Addressing the seventh ministerial meeting of Caspian states in Moscow on Tuesday, Zarif said he was honored to announce that the five countries share the view that the Caspian Sea’s issues should be addressed only by the littoral states.

The countries have also agreed to ban foreign military forces, he added, saying there is a consensus on the bulk of the Caspian Sea legal regime.

Stressing the need for “fairness” and “mutual respect” in demarcation of maritime boundaries in the Caspian Sea, Zarif said disagreements on demarcation of the zones could be resolved through “closer interaction and mutual flexibility by all parties.”

Iran is ready to let other Caspian states have access to international waters when it comes to the transportation of goods or oil and gas transfer, he added.

Heading a delegation of political and legal experts, Zarif is in Moscow for the ministerial meeting, which he said follows 49 sessions at the level of political experts.

The two-day meeting precedes a summit of Caspian leaders, due to be held in Astana.

The ministerial meeting focused on the draft document of the Convention on the Legal Status of the Caspian Sea.

The Caspian Sea Convention will determine the territorial rights of the littoral states as well as other matters related to the world’s largest landlocked body of water.