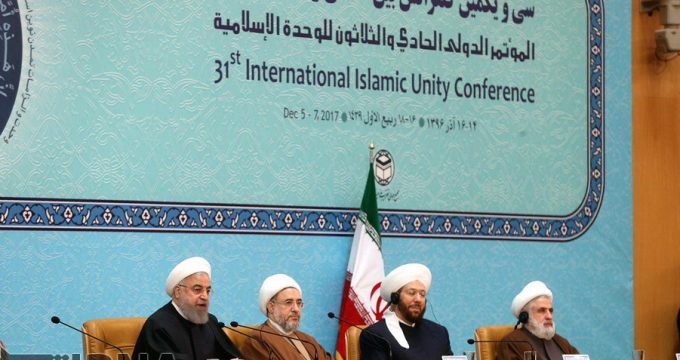 Iran’s President Hassan Rouhani has blasted certain regional and Muslim countries for setting aside their shame and disclosing their relations with the occupying regime in Israel.

On the occasion of Prophet Mohammad and Imam Sadeq’s birth anniversaries, Leader of Islamic Revolution has pardoned and commuted the sentences of 1007 prisoners.

Parliament Speaker Ali Larijani hails Iran and Russia’s successful fight against terrorists in the region, saying the two nations are at the forefront of counter-terror battles unlike other coalitions, which have taken no practical measures to eradicate terrorism.

Ministerial meeting on Caspian Sea kicks off in Moscow

A meeting of the five Caspian Sea littoral states at ministerial level began in Russia on Tuesday to continue their discussions on legal status of the Sea.

Turkmenistan says it plans to take a dispute with Iran over gas supplies to international arbitration.

Turkish Foreign Minister Mevlut Cavusoglu has called his Iranian counterpart Mohammad Javad Zarif to say that the shootout incident in the two countries’ border is being investigated and the results will be declared to the Iranian officials soon.

Coup against Yemen’s Ansarullah nipped in the bud: IRGC

The Chief-Commander of the Islamic Revolution Guards Corps (IRGC) Major General Mohammad Ali Jafari has hailed the foiling of a plot against the Houthi Ansarullah movement.

Head of Atomic Energy Organization of Iran (AEOI), Ali Akbar Salehi, said Tue. that Iran nuclear deal (JCPOA) bolsters the Non-Proliferation Treaty and is in the best interest of Iran and international community.