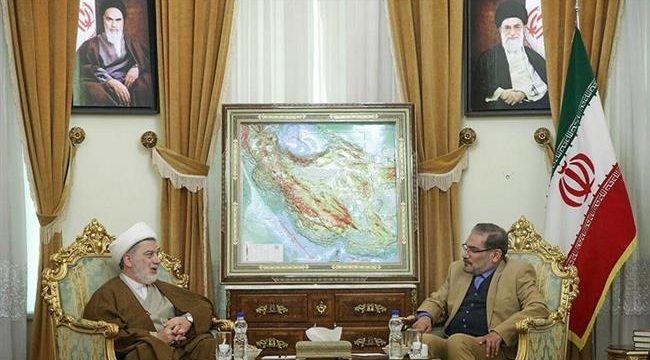 The fact that a Western country’s president echoes calls by the Israeli regime and emphasizes the disbanding of the volunteer pro-government forces, commonly known by their Arabic name as Hashd al-Sha’abi, shows a new plot is being hatched to bring insecurity and terrorism back to the region, Shamkhani said in a meeting with the head of the Islamic Supreme Council of Iraq and the first deputy speaker of the country’s parliament, Sheikh Humam Hamoudi, in Tehran on Monday.

He added that wisdom of the Iraqi officials, particularly the lawmakers, would thwart the enemies’ plots to undermine the country’s solidarity and national security, saying, “Certainly, such plots will be foiled.”

During a visit to Iraq on Saturday, French President Emmanuel Macron called for a “gradual demilitarization” and the “dismantlement” of the PMU fighters and all militias in Iraq. His call was widely received with outrage and anger by many in Iraq.

Ahmad al-Assadi, one of the PMU’s leaders, was quoted by AFP as saying that “any such discussion is rejected and we do not accept interference in Iraqi affairs.”

Hashd al-Sha’abi is a group of Shia and Sunni fighters that was formed after the emergence of Daesh in Iraq in 2014. In the early days of the Daesh terror campaign, the then volunteer fighters played a major role in reinforcing the Iraqi army, which had suffered heavy setbacks in the face of lightning advances by the terrorists.

The senior Iranian official also pointed to the collapse of Daesh Takfiri terrorists in Iraq and said resistance of the Iraqi people and acts of great bravery by the country’s army and security forces, particularly the PMU fighters, led to the collapse of the “biggest threat to the region.”

The United States and Israeli regime are creating and spearheading an important part of regional crises with the purpose of protecting the Tel Aviv regime’s security and selling more arms, Shamkhani added.

He emphasized that national unity and solidarity in Iraq would guarantee the country’s stability and security and serve the interests of all ethnic groups.

“Close cooperation among all countries victimized by terrorism in the region in order to counter terrorism on military, security and cultural fronts is an inevitable necessity and a deterrent factor preventing the re-emergence of terrorism,” Shamkhani pointed out.

Hamoudi, for his part, commended Iran’s great role in the fight against terrorist groups in Iraq and across the Middle East.

Iraq has managed to gain major victories despite economic and security problems, he said, adding that the country would continue this path in cooperation with its true allies.