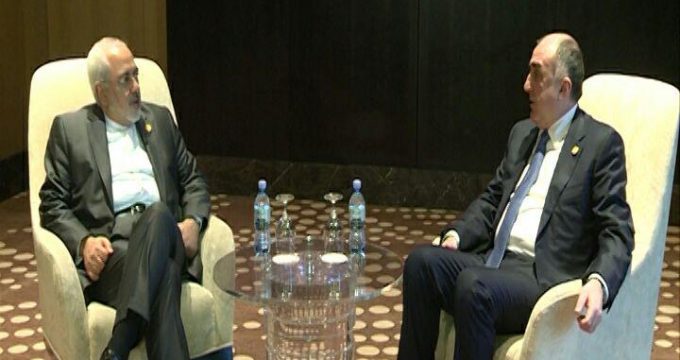 The meeting took place behind closed doors on the sidelines of Heart of Asia 7th Ministerial Conference in the Azerbaijan’s capital.

Zarif had met with Azarbaijn’s President Ilham Aliyev earlier in the day.

The Heart of Asia Conference was held in Baku participated by 250 participants from some 40 countries and international organizations.

The presidents of Azerbaijan Republic and Afghanistan, foreign ministers of Iran, Pakistan, India, Turkey and Afghanistan, deputy foreign ministers of Kyrgyzstan, Kazakhstan and Turkmenistan, special envoys from China and Russia on Afghanistan affairs, senior officials from Saudi Arabia and the UAE, as well as the special envoy of the UN secretary-general on Central Asian affairs are among the participants in the event.

Special envoy of the British prime minister on Afghanistan affairs, US State Department representative on South and Central Asian affairs, as well as high delegations from Japan, Spain, Norway, Italy, Canada, France, Finland, Poland, Egypt and Sweden are also present at the Conference.