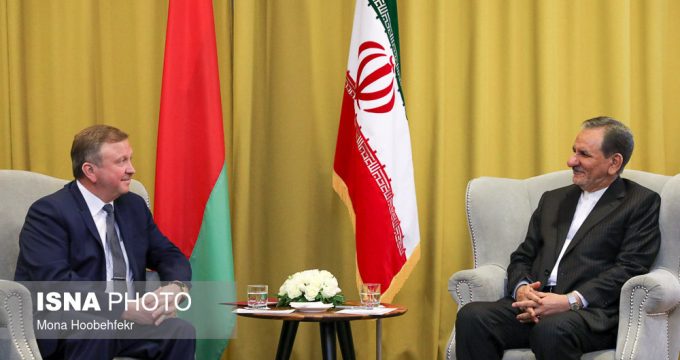 Es’hagh Jahanigir conferred with Prime Minister of Belarus, Andrei Kobyakov, on the sidelines of thw 16th meeting of the Council of Heads of Government of the Shanghai Cooperation Organization (SCO) underway in Sochi, Russia.

The Iranian 1st VP, while referring to the upcoming visit of Belarusian president to Tehran, expressed hope that, during the visit, venues will be discovered for reinvigoration of relations between the two countries.

“Tehran and Minsk are able to launch cooperation on a wide variety of fields,” said the official stating that the 14th Joint Economic Commission between the two countries needs to investigate new venues for collaboration and remove existing barriers.

Referring to purchase of two consignments of Iranian crude by Belarus, he voiced the country’s readiness to expand oil relations with the European country. Jahangiri also welcomed investment of Belarusian firms in Iranian oilfields.

The Iranian side criticized the US plot to hinder proper implementation of the Joint Comprehensive Plan of Action (JCPOA) asserting “Iran is now enjoying ties with the international banking system and is willing to reinvigorate similar relations with banks in Belarus.”

“With assistance of Russia, Iran and governments of Iraq and Syria managed to defeat terrorist groups,” highlighted Jahangiri noting that cooperation among regional countries can thwart likely attacks by terrorists in other countries.

He later appreciated the support given to Iran by Belarus in international communities and stressed the need to elevate level of collaboration between Tehran and Minsk.

Also at the meeting, Prime Minister of Belarus Andrei Kobyakov expressed condolences and sympathies over the bitter earthquake incident in the west of Iran and expressed his country’s readiness to develop trade and economic ties with the Islamic Republic of Iran.

Recalling that his country had also suffered cruel sanction for a period of time, he said Tehran and Minsk had excellent mutual understanding expressing hope that the two sides would further bolster relations in the post-JCPOA era.

He described Iran as a great country with a rich culture and civilization adding “we are pleased to have Iran as our partner inside the region.”

Kobyakov voiced his country’s eagerness to develop trade and economic relations with Iran concluding that efforts will be made to pave the path for direct negotiations between central bank officials of the two sides in a bid to tackle banking restrictions.