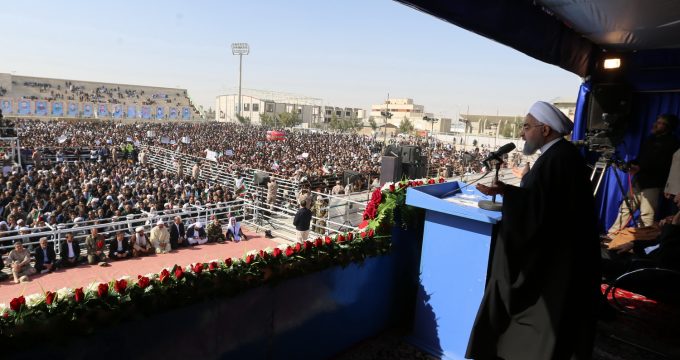 president.ir-President addressed the bumper crowd of the people of Zabol, and described Sistan and Baluchistan province as the land of myths that has always kept Iran safe throughout the history, adding that all religions originate from the mighty tree of Islam, the Prophet (PBUH) and the Qur’an.

Dr Hassan Rouhani said on Saturday: “Some powers have spread discord between ethnic groups and religions, as well as terrorism throughout the region, except for our dear Iran, which was not given a chance to disagreement and terrorism due to the moderate Islam that it is practicing”.

“Here is the land of great authorities and scholars, including Ayatollah Sistani, speaking from Najaf in support of Sunnis and Iraqi Kurds,” continued the President.

All branches of Islam come from the mighty tree of Islam, the Prophet, and the Quran, continued the President, adding: “And all ethnic groups come from Iran and it is an honour for all of us that we are Iranians and Muslims”.

“Some powers have spread discord between ethnic groups and religions, except for our dear Iran because it practices moderate Islam,” added the President of the Islamic Republic of Iran.

Stating that major world powers wanted to spread ISIS from Iraq and Syria to the entire World of Islam, he also went on to say: “We are glad that the countries of the region overcame terrorism”.

“They wanted to stop the progress of the region by terrorism, but today, the bases of ISIS in the region have been shattered,” he continued, saying: “I hope that we soon see the day of eradication of terrorism and violence”.

Dr Rouhani also went on to say: “We want all Islamic countries to stand together and be united and we will support and stand by all Muslims around the region”.

Saying that the Port of Chabahar connects the province to Central Asia and Afghanistan, he said: “The first phase of Chabahar’s Shahid Beheshti Harbour will be opened tomorrow”.

“Iran’s rights to the Helmand and Hamoun water must be secured in accordance with international law and agreements with our neighbours,” said Rouhani adding that Iran’s relations with Afghanistan, Pakistan and Oman are better than ever.

“If some have a war of princes and have not achieved their goals by supporting ISIS and bombing Yemen for years, it’s not Iran’s fault,” Dr Rouhani added.

“I promise to all ethnic groups, women and the youth of Iran, the province and Zabol that management will be handed over to them step by step,” President Rouhani said, adding that meritocracy is the principle.