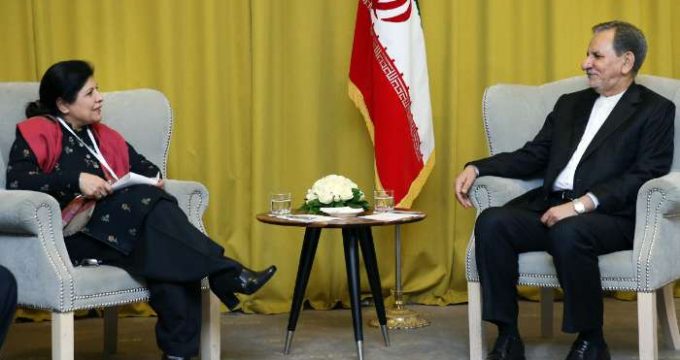 Iranian Veep: All sanctions must be eliminated under JCPOA

IRNA – Iranian First Vice President Es’haq Jahangiri reiterated that all sanctions against Iran should be removed under the 2015 nuclear deal to help Tehran comply with its commitments for cooperation with the United Nations ESCAP in line with sustainable development.

The nuclear deal officially known as Joint Comprehensive Plan of Action (JCPOA) reached between Iran and six world powers to curtail the country’s nuclear activities in return for relief from international sanctions.

Jahangiri further noted that unfortunately, certain sanctions have not been removed and the opposing party did not adhere to its commitments under the deal.

The Iranian senior official who is currently in the Russian city of Sochi to attend the 16th Forum of Shanghai Cooperation Organization’s Council of Prime Ministers said in a meeting with the United Nations under secretary-general Ms. Shamshad Akhtar that Iran has vast plans for its development and it is interested to use ESCAP’s experience and consultations in line with sustainable development.

ESCAP is the United Nations Economic and Social Commission for Asia and Pacific. Ms. Akhtar is the executive secretary of ESCAP.

Referring to Iran’s long-standing cooperation with the entity, he called for enhancing collaboration in line with sustainable development.

Iran has been suffering from drought for years, he said, noting that in some cases severe rainfalls trigger flood, causing damage to human life and properties.

Prevalence of drought in recent years has turned certain areas in Iraq, Syria and Saudi Arabia into hubs of dust storms, affecting life of most people in Iran, even in the capital.

Jahangiri called on the UN to help settle the problem, saying that UN should give a special focus to the issue, as dust storms have created problems for a large number of people in the region.

Pointing to the talks conducted between Iran and ESCAP to set up center for management of information on natural disasters affiliated to the UN in Tehran, Jahangiri said that Iran has undertaken all its commitments for establishing the center.

Ms. Akhtar said efforts are underway to establish the center at the earliest.