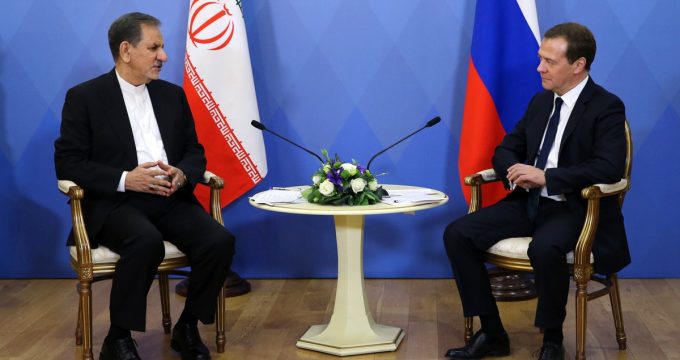 December 2, The Iran Project – The Iranian First Vice President Eshaq Jahangiri arrived in Russian city of Sochi on Thursday (Nov. 30) to participate in the 16th meeting of the Council of Heads of Governments of the Shanghai Cooperation Organization’s (SCO) member states.

Talking to Jahangiri, Medvedev said that extensive relations have been established between Iran and Russia in various arenas and future of their bilateral relations is “bright”.

Medvedev stressed that Moscow believes there is no problem with Iran’s membership to the Shanghai Cooperation organization.

Jahangiri, for his part, hailed Tehran-Moscow ties in various fields, saying that cooperation between Tehran and Moscow in fighting terrorism, particularly in Syria, can serve as a role model in the international level.

Besides, Jahangiri and Akhtar discussed issues of mutual interest.

Jahangiri reiterated that all sanctions against Iran should be removed under the 2015 nuclear deal to help Tehran comply with its commitments for cooperation with the United Nations ESCAP in line with sustainable development.

Meanwhile, Jahangiri hailed Tehran-Minsk cordial ties, especially in time of sanctions and under difficult conditions, saying that Iran is seriously determined to enhance political and economic relations with Belarus.

Belarusian premier, for his part, expressed sympathy and condolences over the devastating quake in western Iran, describing Iran as the most significant partner of his country.

Minsk is interested to promote economic and trade ties with Iran to the highest possible level, Kobyakov said.

Addressing the forum, Jahangiri said that Iran is ready for assuming a great part in strengthening regional peace, stability, security and development through promoting collaboration with SCO member states.

“We hold out hand of friendship to all SCO member-states and consider organizational cooperation at the regional and international levels in the interest of all countries, nations as well as governments interested in peace, welfare and security,” Jahangiri stated.