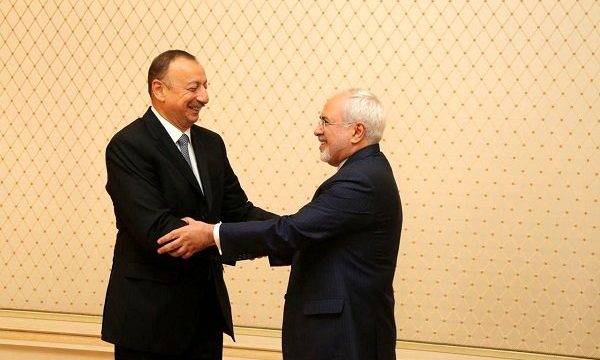 The top Iranian diplomat held talks with several senior officials in Baku on the sidelines of the seventh Ministerial Conference of the Heart of Asia – Istanbul Process on Afghanistan.

His stay in Baku witnessed meetings with Azerbaijan Republic’s president Ilham Aliyev, his Azeri counterpart Elmar Mammadyarov, his Turkish counterpart Mevlüt Çavuşoğlu, his Pakistani counterpart Khawaja Mohammad Asif and his speech in the conference, as well.

Zarif and Aliyev exchanged views on bilateral ties as well as trilateral cooperation between Tehran, Baku and Ankara. They also mulled over issues like combating terrorism and extremism, the joint project on utilization of Caspian Sea resources, cooperation in Afghanistan, transport as well as bilateral political dialogue.

Iranian and Azerbaijani official also voiced satisfaction towards expansion of economic relations between the two countries and welcomed the advancements made in financing railroad projects.

The meeting between Zarif and his Azeri counterpart took place behind closed doors on the sidelines of Heart of Asia 7th Ministerial Conference in the Azerbaijan’s capital.

Zarif, at a joint meeting with Asif, described Pakistan as a major neighboring country for Iran and stressed the need to bolster cooperation in various fields.

The Iranian side said Chabahar and Gwadar ports complemented each other and it would be wrong to describe them as rivals.

Asif, for his part, called for expansion of transport and energy ties between the two countries saying “a Pakistani delegation will pay visit to Chabahar in order to inaugurate the port.”

In an address to the Heart of Asia Conference, the Iranian foreign minister called for “resolute unified response'” by the world countries to confront the threat of extremist violence and terror.

Referring to a counter-terrorism strategy which was drafted two years ago by the Heart of Asia members in Islamabad, Pakistan, Zarif said, “We are looking forward to considering of the draft strategy by governmental experts and senior officials for adoption here, which would provide a solid foundation for our cooperation against terrorism and violent extremism.”

Speaking to reporters on the margins of conference, Zarif touched upon the goals and importance of the ongoing Conference saying “Heart of Asia – Istanbul Process on Afghanistan is an effort to boost cooperation among regional countries for development of economy and security in Afghanistan.

he Heart of Asia Conference was held in Baku participated by 250 participants from some 40 countries and international organizations.

The presidents of Azerbaijan Republic and Afghanistan, foreign ministers of Iran, Pakistan, India, Turkey and Afghanistan, deputy foreign ministers of Kyrgyzstan, Kazakhstan and Turkmenistan, special envoys from China and Russia on Afghanistan affairs, senior officials from Saudi Arabia and the UAE, as well as the special envoy of the UN secretary-general on Central Asian affairs were among the participants in the event.

Special envoy of the British prime minister on Afghanistan affairs, US State Department representative on South and Central Asian affairs, as well as high delegations from Japan, Spain, Norway, Italy, Canada, France, Finland, Poland, Egypt and Sweden were also present at the Conference.